Upcoming New York playwright Lizzie Vieh’sMonsoon Season is a dark and twisted tale of paranoia and addiction, taking you down to humanity’s darkest depths with biting humour and blinding insight.

My name is Lizzie Vieh and I am a playwright from Phoenix, Arizona. I live in New York City, and my play Monsoon Season is premiering at the Edinburgh Fringe Festival this August.

I would call it a twisted love story set against the background of addiction, obsession, and crime. Also, it’s funny.

To get my play seen by as many people as possible in a setting that is open to new, edgy work.

I was cast as Lysistrata in a play my sophomore year of high-school, and from that point on there was no turning back. I started writing plays in college, and somewhere in my late twenties, officially made the switch from acting to writing. I wanted to be a playwright because it is the least lonely form of writing. It’s collaborative! Some of my inspirations are Caryl Churchill, Maria Irene Fornes, Tennesee Williams, Sarah Kane, Wallace Shawn, and Adrienne Kennedy.

Trial lawyer or dog whisperer. I wanted to be a vet when I was little, until I learned you had to like stick your hand up cows and stuff.

A screenwriter for original films on Lifetime: Television for Women. I’m kidding. (I’m not kidding.)

Drawing horses on the placemats at restaurants and giving them to my grandma.

I do not! Which is probably why I will never be an influencer. I also don’t really like “ripped from the headlines” art, unless it’s Law and Order SVU.

I think Trump’s presidency has lent a new value to angry feminist work. It isn’t belittled or mocked as much anymore. People (I hope) realize it is vitally important. The current political climate has made my work angrier, and I think made a lot of people more receptive to angry work.

Struggling against inertia, always behind.

Laurie Metcalf. I think she’s a genius actor, and I learned a lot about comedic timing from watching her performance as Jackie on Roseanne.

Don’t know yet! Ask me once I’ve done it.

Monsoon Season is on 1st - 25th August (not 12th or 19th) at Underbelly Cowgate, Belly Button at 2.25pm. Tickets and more information: https://tickets.edfringe.com/whats-on/monsoon-season 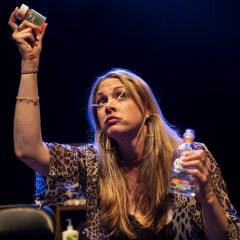 Upcoming New York playwright Lizzie Vieh’sMonsoon Season is a dark and twisted tale of paranoia and addiction, taking you down to humanity’s darkest depths with biting humour and blinding insight.