"I think comedy in its most fundamental form is meant to work against public sentiment. We aren’t moved by someone we completely agree with."

My name is Langston Kerman. I’m best known for my role on HBO’s Insecure, which I’m not even sure is available in the UK, which means to most of you, I don’t really exist. Anyway, I tell pretty funny jokes, and hopefully you’ll come see me tell jokes, so that I can finally exist.

I’m really excited about the ways that Fringe encourages the quiet in comedy. In America, so much of what goes into the comedy clubs is driven by big laughs and quick punches. However, everything that I’ve heard about Fringe suggests that this is a place that celebrates the parts of comedy that are sometimes more difficult to make comfortable. I’ve worked very hard to make sure my comedy has benefited from the intentional hush in the room, largely because that hush to me means that I have the audience fully locked in on my perspective and my story. And although my show 100 percent goes for laughs and isn’t meant in any way to be melodramatic, I think Fringe will offer a beautiful opportunity to really live in the joy of comedy that isn’t traditionally loud and projected outward.

This all kind of makes me feel like I’m describing my comedy as jazz. It’s not jazz. It’s funny. Please don’t ever listen to jazz. That shit isn’t funny.

I can’t think of anywhere else, certainly in America that gives you an entire month to perform an entire hour of comedy. Every other festival I’ve done has offered, at best, a few hours on stage in total, but this festival is going to allow me to do my show so much that I hate it, and I for one can’t wait.

I spent most of my younger years watching a show called Comic View on BET. It was a predominantly black show, with hugely charismatic/high energy performers. I’d stay up every single night and watch it, and then after I’d watch uncut music videos (they were allowed to show titties). I loved it with all my heart, although because it was my only sense of comedy I never thought a person like me who didn’t have as much energy could ever do the same art. Years later, I started to discover other brands of stand up that started to shape a newer, more familiar perspective of my comedic choices. And then even more years later, I left college with no job, no money and nowhere to go except my mom’s basement, so I figured that trying comedy was a perfectly reasonable idea. Now, here we are.

I used to be a high school English teacher before I fully immersed myself in comedy, and I haven’t updated my resume since I left that job, so I probably would have to go back to doing that. Of course, that is until I eventually end up fist-fighting one of the kids and get myself sent to jail, where I’d likely try to get a job as the prison librarian. Short answer: prison librarian.

I had a dog named Sasha who was almost exactly the same age as me (she died much sooner than I did -- a real quitter that one). Anyway, when I was 3 or 4 I remember her chasing me through my parent’s apartment and the only place where I was “safe” was on the couch because her legs were too short to jump up. She was a nice dog. I miss her very much.

Do I feel pressure to comment? Not at all. Do I feel moved to comment? Absolutely. I think that comedy is a beautiful opportunity to explore the cultural and social complexities that take shape around us, and as I read about those things and wrestle with those feelings, I love using the stage as a place to explore that. It isn’t so much driven by a need to constantly be taking on the most current subjects. I’m much more attracted to evergreen material, but I do want the emotional truths of the times and happenings to always be coming to light. In that way, I think my material is constantly changing and growing. As my opinions change or as I learn new things, so do the bits. I want my comedy to breathe, not just stay still because the jokes get an easy reaction.

I think comedy in its most fundamental form is meant to work against public sentiment. We aren’t moved by someone we completely agree with. We’re moved by someone who challenges us to find something human in the things that make us uncomfortable. That isn’t to say that I’m constantly working to be oppositional. I hope that isn’t the case, but I do want to make sure that at all times my jokes are helping to push people forward and not just serve up feelings we all already accept.

We should hear back soon.

At some point, a person sat down and said, “I want to create a way for people to keep writing without filling in every word,” and thus the ellipsis was invented. I want to hang out with that genius.

What advice would you give to someone who wants to take a show up to the Fringe?

Start figuring out where you’re going to live immediately. Apparently, everyone knows right away and you’re going to be the dummy having to beg to stay in someone’s janitor closet if you don’t jump on it as soon as possible. Also, find out if there are any black barbershops in Scotland. Doesn’t matter if you’re black, just find out and pass the information along.

You can find me at @langstonkerman on both Twitter and Instagram. I’m pretty sure I’m the only human on earth with my name, so turns out the handle was super available.

I’ll be performing The Loose Cannon is at the Edinburgh Festival Fringe from 1st – 25th August (not 12th) in Underbelly Bristo Square’s ‘Jersey’ at 7.45pm. For tickets go to: https://tickets.edfringe.com/whats-on/langston-kerman-the-loose-canon 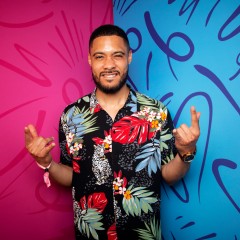 "I think comedy in its most fundamental form is meant to work against public sentiment. We aren’t moved by someone we completely agree with."