"You don’t want to become stale or irrelevant, but at the same time you want to work on your stuff long enough for it to reach its full potential."

I’m Jon, I’m a stand up and musical comedian. I tell jokes and sing stupid songs.

It’s about how, through working in a recycling factory, I discovered how awful I am to the planet... but it’s funny and not a total downer, I promise.

I love it. I went before I did comedy and it’s my favourite time of year. I’ve got a lot of Scottish family too, so it’s when I get to see all of them.

The sheer scale of it. There’s nowhere else you can get to perform comedy so often in such a concentrated period of time, and to people from all over the world.

Growing up, my sister and I would watch lots of comedy on VHS, like the 90’s/early 00’s legends we were. Our favourites were Kevin & Perry Go Large & Billy Connolly’s stand up. Then as I got older, I leaned more and more towards stand up. I’d watch Eddie Izzard and Dylan Moran over and over. My musical comedy inspirations were Flight of the Concords and Victoria Wood.

I’d say Malcolm Gladwell’s job at the New Yorker: to have the freedom to write articles about absolutely anything you like and find interesting. Or maybe an author like Donna Tart. Given the space to chip away on a single piece of work for a decade. I guess to get those jobs you have to be as clever and talented as Gladwell and Tart, right?... Damn.

I always drew comic strips (badly) as a kid and my primary school teacher, being supportive, asked me to do one for the school notice board. It was to go alongside an announcement that they’d bought some plastic cricket stumps and bats for the playground. I drew a three-cell comic strip of a batsmen getting out, with “how” “is” “that?” as the three captions. I hung around near it to hear people’s reactions. No one noticed for ages and then finally one older boy stopped and looked at it for a second, before saying: “this...is...crap” Slowly pointing out each of the three cells as he said it. A devastating early introduction to the world of reviewers, though pretty funny in retrospect... and he was right, it was crap.

I’m not particularly topical, but I do think it’s important to be constantly developing and working up new material. You don’t want to become stale or irrelevant, but at the same time you want to work on your stuff long enough for it to reach its full potential.

For my own show there’s been a very useful shift, in that I wanted to discuss the environmental topics I’d been learning about in my day-job at a waste and recycling centre (in the education team giving school tours), but it wasn’t feasible because people didn’t really want to discuss it. In the last year or so that has changed, and it’s become much easier. Plus, people have a bigger collective pool of knowledge on the topic now, so you can reference more aspects of it.

“Confusing”, “scary”, but also “over too-quickly”

I’d pick the Beatles in Hamburg, try and get in there as a spare rhythm guitar player. They played eight-hour sets, seven days a week, for months at a stretch. It’s how they got so good. I’d like to have watched that happen.

Make all your goals personal ones, about you as a performer or writer, like “I want to get better at crowd work” or “I want to write fifteen new minutes of material” rather than external things that have loads of factors outside your control, like: “I want to get a five star review” or “I want to get nominated for an award”... that way lies madness! 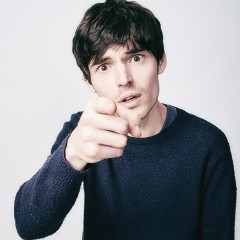 "You don’t want to become stale or irrelevant, but at the same time you want to work on your stuff long enough for it to reach its full potential."