"I’ve always wanted attention, as a kid I even pretended to be a stripper for my Mum and her friend Paula. So awks."

Hey, I’m James Barr - you might recognise me from Grindr, Tinder, Thrinder or for being that guy who asked Justin Bieber about his penis. I’ve spent the last ten years hosting radio and TV stuff, I also co-host the UK’s #1 LGBTQ+ podcast A Gay and A NonGay, and I’m now performing my first ever solo show at the Edinburgh Fringe Festival! AGH!

It’s been described as ‘ridiculously relatable’ ‘rip-roaringy funny’ and also ‘increasingly desperate’. I’d describe it as a hot mess of emotions and a journey to self-love. Dating in 2019 is a ride on the struggle-bus and I spend sixty minutes trying to figure it out by swiping some of the audience to go on a date with me.
Why do you want to perform at Edinburgh Festival Fringe?

It’s a hotbed of hot, kilt wearing Scottish men. Plus, Scotland really is the safest place for my delicate ginger skin during August. With thousands of shows and so many amazingly talented people all up in Edinburgh, the Edinburgh Fringe is one of the most exciting places to be in the world and I can’t wait to join them.

This is my first comedy festival! :)

I was actually so strapped for cash recently that I got a muggle job and worked on the front desk of a gym. I think this tells us one thing, if I wasn’t doing comedy, I’d definitely still be finding ways to meet hot men, professionally.

I’d like to be Prime Minister. My friends tell me I’d be awful, but that makes me even more determined to do it. I think I’d do a really good job. I'd like to introduce a ‘smug-couples-tax’ for anyone posting sickening self-validating Instagram pics captioned “perfect day with this one”. VOM. Plus I’d paint that black Number 10 door pink and change our national anthem to ‘Spice Up Your Life’.

Art? I don’t think I was ever that good at art. I don’t really remember anything specific, but I do remember being fascinated by papier mache. Probably because it sounded French and exotic.

Not so much, but it is super annoying when jokes you’ve written about news events change! My friend has an entire drag show about Theresa May that he has to re-think entirely. I have the opposite problem sometimes too, I’ve had to remove some of the more honest material from my show when there’s been something in the news that might make my audience more sensitive.

Everyone always asks if it’s hard to make jokes now because we’re all ‘snowflakes’ etc but that’s so stupid. If you’re making a joke to be offensive and get a reaction then you’re probably a douchebag - but if you’re harnessing your point of view, staying true to yourself and not harming anyone, I believe you can still joke about anything.

Victoria Wood. I think we have a similarly silly sense of humour and I love her so much. Very sad to lose her.

Breathe. Get a yoga pass. Visit the Royal Botanical Gardens. Remember you’re working and try not to overthink it or expect any kind of success from it. I performed work in progress last year and I’ve honestly never worked so hard for nothing. It’s a marathon. Finishing it is the goal. :).

My socials are all @imjamesbarr, you can get tickets for my show at imjamesbarr.com and you can listen to my podcast A Gay and A NonGay on Apple Podcasts, Spotify and at gaynongay.com. Yay. Thanks for reading.

Thirst Trap will be at Edinburgh Fringe from 1st –25th August (not 12th) in White Belly, Underbelly Cowgate at 5:30pm. Tickets from: https://tickets.edfringe.com/whats-on/james-barr-thirst-trap 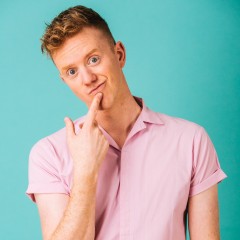 "I’ve always wanted attention, as a kid I even pretended to be a stripper for my Mum and her friend Paula. So awks."