"If anyone comes away from Danger Brigade with a moral or message, that is a profound mistake on our part. We want this show to be the comedic equivalent of an ostrich burying its head in the sand."

Hello! We are Crybabies, we’re a three-dweeb comedy group and if you haven’t already clicked somewhere else then thanks for sticking with us.

It's a surreal comedy-adventure set in World War Two. The Allies learn of a Nazi plan to create a mythical monster that could spell the end of the world. Unfortunately, their best agent has gone missing, so it's down to three damaged and deeply insecure losers to try and save the day. We follow captain of banality Skipps McCoy, celebrity superspy Chester Daggerboot, and Porky, on a mysterious journey behind enemy lines as the familiar setting of the Second World War gradually fades into a strange world of talking furniture, father issues, and skeleton armies.

There’s nothing else really like it. It’s like this weird alt-universe where everyone you respect and admire is just hanging out and trying to make people laugh. Even if no one came to see our show, we can think of worse places to spend a month.

The sheer scale of Edinburgh is something else completely. The fact that you’re doing 25 shows in a row, while trying to catch all the great stuff that’s up there means you end up running on a cocktail of Red Bull and meal deals. Plus, no other festival can guarantee at least one evening where you’re walking home at 5am across the picturesque meadows, listening to the birds wake from their slumber thinking ‘what the hell have I done?’

Growing up in the nineties meant we were pretty much raised on The Simpsons. It’s still probably the main reference for everything we do.

James is very good at table tennis so there’s always that. Also, he wants to be a wrestler. For any concerned readers, James is 26 and doing just fine. Mikey would be a tax collector. Like the Sheriff of Nottingham. If we’re not allowed to make people laugh, we might as well stop them from ever having a nice time ever again. And Ed would be a copywriter. He’d make 35k a year, have two kids and dream of moving to Italy but never actually do it. He would also play tennis once a week with Ryan from work.

I think secretly we all know that James is right. Pro wrestler has been, and will forever be, the dream.

We’d like to make insightful comments on the increasingly terrifying world we live in, but we tend to get side-tracked by talking about crisps. You could argue that it’s precisely that kind of apathy which has led our society to its current brink of destruction. You could also argue that it’s a political statement in itself, to consciously not address anything political. We would argue against both these points. We just want to talk about crisps.

You of course have a responsibility to be aware of cultural shifts and sensitive towards your audience. After all, you’re there for them, not yourself. That said, if anyone comes away from Danger Brigade with a moral or message, that is a profound mistake on our part. We want this show to be the comedic equivalent of an ostrich burying its head in the sand. Plus, everyone likes crisps.

Have they emailed back yet?

Jack Lemon. Well, Jack Lemon as Professor Fate in The Great Race. Actually, could we just be in that film? We can play one of the extras in the pie fight. Essentially, go and watch The Great Race.

Twitter’s always a friendly place. We’re @crybabiescomedy. Also, for all the best horse racing tips, be sure to check out @gaultstats. The only trends you’ll need!

Where can people see your show?

Crybabies: Danger Brigade is on from 1st – 25th August at Edinburgh Festival Fringe (not 14th) at [email protected], Basement at 4pm. For tickets and more information: https://tickets.edfringe.com/whats-on/crybabies-danger-brigade 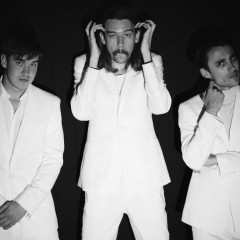 "If anyone comes away from Danger Brigade with a moral or message, that is a profound mistake on our part. We want this show to be the comedic equivalent of an ostrich burying its head in the sand."