"It was our experiences doing comedy at uni which allowed us to perform in professional theatres nationally and at the EdFringe every year that ingrained comedy so tightly into the fabric of our lives. Now if we don’t have funny, we have literally nothing."

We are Megan from HR. And in a way, aren’t we all? But more specifically, we are a new comedy duo from London. Our mother-given names are Ambika Mod and Andrew Shires.

Children of the QuornTM is our debut hour as a duo: it’s a sketch/horror show which sees the two of us trying to raise the dead to mixed results. Within this, we also weave in and out of sketches that range from observational to a bit more absurd. On the whole, the show is high-energy and we have thought a lot about the narrative and how to create a story for the audience, especially how everything ties together by the show’s conclusion where there’s a major plot twist (#nospoilers). In case it’s not clear already, we’re pretty proud of ourselves.

As aspiring comedy performers/writers, the Fringe is everything. We have performed in Edinburgh three times before and last year was the first year in four years, neither of us came up to the festival. We weren’t disappointed but we were devastated. The Edinburgh Fringe is a lifestyle; you get a taste of what it would be like to actually do this job full-time and it tastes amazing.

We haven’t actually performed at any other festivals so are probably not qualified to answer this question but we can guess it’s probably better than the others.

We’ve both been comedy fans since a really young age (we’re both really into American comedy in all its forms) but when we met at the beginning of our first year at University when we both got into the exclusive uni sketch troupe, we discovered we could actually get involved. It was our experiences doing comedy at uni which allowed us to perform in professional theatres nationally and at the EdFringe every year that ingrained comedy so tightly into the fabric of our lives. Now if we don’t have funny, we have literally nothing.

Andrew: Probably something in animal husbandry

Ambika: I’m unemployed so if I didn’t have my current job I would be making a respectable living.

Andrew: Definitely something in animal husbandry.

Andrew: I think it was going to see the phantom menace (in the cinema (rogue)) and loving it.

Ambika: This is so cliché but I remember watching Friends since I was so, so young and even though I had no idea what was going on, I remember finding it so funny anyway. And that ambition to be that funny and skilled as a performer has always stuck with me.

To be honest, we’ve always avoided politics/satire/social commentary in our comedy since we started doing it. Recently, comedy has definitely become the main way of digesting a lot of the disturbing changes the world is going through which is so important for any art medium but sometimes it feels like people have forgotten comedy is also about bringing joy to people. And that is our complete, unadulterated goal. Isn’t there enough misery in the world?

Again, we try to create work that isn’t only relevant or funny at one point in time and we rely on writing material that will appeal to wide variety of people. However, there is absolutely more of a place for us now in this industry than there was when we were growing up. Ambika is of Indian descent, the daughter of immigrants, and Andrew is a gay man who was raised in a Catholic family and the discourse around diversity over the past few years especially has really allowed us to come into our own and create material that doesn’t capitalise on our otherness but just allow us to be who we are. Obviously there’s still a way to go, but there’s definitely more acceptance around people doing comedy who aren’t straight white men. And isn’t that the American Dream???

Jonas Brothers back together. Huge.

There are pros and cons to both. Obviously Free Fringe is more accessible and allows anyone to get involved regardless of barriers, financial and otherwise whilst the bigger venues that charge on tickets generally go to the more established acts that have the name, reputation and money to cover the costs. So you do see a bit of a rift occur which is obviously not ideal.

We were part of the latter group whilst we were at Uni, performing at Underbelly, and we were lucky to get great audiences, which meant it was never a risk financially, but most companies don’t have this luxury. This year, because we’re sort of starting over, we’ve gone with a PWYW scheme, which is what Just The Tonic is really known for, and allows us to charge a reasonable price for our tickets but also make a bit of extra money if people came in for free and really like the show.

Sort out your finances. Obviously the Fringe is really fun and a great experience but it is EXPENSIVE and you have to ask yourself if it’s really worth it. Also really believe in your work and that what you’ve created will stand out from the THOUSANDS of other shows being put on because then regardless of how the show does, at least you feel secure in your own work.

You can see Children of the Quorn™ at Just the Tonic, La Belle Angele from 31 July to 26 Aug (not 12) at 1.10pm. For tickets please visit https://tickets.edfringe.com/whats-on/children-of-the-quorn 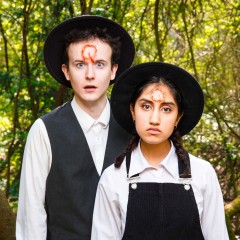 "It was our experiences doing comedy at uni which allowed us to perform in professional theatres nationally and at the EdFringe every year that ingrained comedy so tightly into the fabric of our lives. Now if we don’t have funny, we have literally nothing."