"I’m a comedian probably best known on the live circuit for being part of the sketch group BEASTS, and I pop up in things like Drunk History, The Reluctant Landlord, and I’m one of the main cast on the BBC’s Horrible Histories."

My name is James McNicholas - I’m a comedian probably best known on the live circuit for being part of the sketch group BEASTS. I’ve also done plenty of acting and writing work elsewhere. I pop up in things like Drunk History (Comedy Central), The Reluctant Landlord (Sky One), and I’m one of the main cast on the BBC’s Horrible Histories.

Essentially, it’s a show about boxing told by a bespectacled man who’s never boxed. My grandad, Terry Downes, became world middleweight champion in 1961. This show tells his story, as well as reflecting on the huge gulf between us. I am not brave; I am not a fighter. I once hospitalised myself putting a contact lens in.

As BEASTS we’ve already done five lovely Edinburgh runs, and as Owen is busy having a baby it felt like the right time to branch out and make a show on my own. For a comedian, Edinburgh really is THE festival.

The cost of accommodation? Setting that aside, it’s the crowds really: nowhere else do you get that sheer volume of football and potential audience. There’s also a real sense of history and legacy - Edinburgh makes you feel like you’re part of something bigger.

My friend Jack Hartnell was in a sketch group called The Three Englishmen, and it looked like so much fun I decided to give it a crack myself. I owe a lot to him and the rest of the Englishmen, they helped BEASTS get a bit of early momentum. In terms of inspiration, in my late teens I was completely obsessed by acts like We Are Klang and Terry Alderton.

Alongside the comedy, I also do some sports journalism, so I reckon I’d be doing that full-time. Essentially nothing that constitutes a ‘proper job’.

I already have one of the best jobs in the world - but it’d be difficult to turn down being frontman in a band. Comedians are often people who want to be rockstars but don’t have the swagger.

Going to see The Sooty Show live at the Bloomsbury Theatre. On the back of the programme there was a picture of Sooty facing away from you, with the text “Sooty’s back”. I thought it was the best joke ever. Sometimes I still do.

This show is one set primarily in the 1950s and 1960s, but you want to make that source material relatable and relevant for a modern audience. It’s a tricky balance to strike between nostalgia and contemporaneity.

I think ‘masculine identity crisis’ has definitely influenced my decision to make this show. It’s partly about what it means to be a man, and the way in which that idea evolved. Also, I used to play Michael Jackson in my pre-show music but the documentary has really put paid to that.

I’d love to work with Reeves and Mortimer. I grew up watching them and I still find them hilarious.

This is a great question. I’ve always worked with a paid venue (The Pleasance) because I’ve been lucky enough to have a good relationship with them that goes back more than 10 years. There’s a certain cache to performing at such a well-regarded venue, and the facilities and the footfall help too. However, there’s something pretty special about the free fringe, and it attracts audiences you wouldn’t otherwise get. Anecdotally, I’ve heard that paid venues tend to attract more industry, but it’s difficult to be sure about that.

Just do it? There’s always an excuse not to do it. Grasp the bullet, bite the nettle. Just go for it.

Every day at 16.15 in Bunker Two at the Pleasance Courtyard.

I’m tweeting @jamesmcnicholas and getting jealous of my friends’ holidays on instagram at @jmcnik. 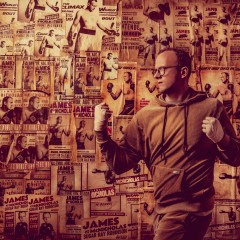 "I’m a comedian probably best known on the live circuit for being part of the sketch group BEASTS, and I pop up in things like Drunk History, The Reluctant Landlord, and I’m one of the main cast on the BBC’s Horrible Histories."