Ben explains how his Arts Award helped with his career in technology and tech journalism.

What are you doing in your creative work at the moment?

I’m studying Engineering at university, and during the summer I have an internship as a software engineer. I'm also a freelance journalist working for Hackaday.com where I report on up-and-coming technology and innovative tech projects. We see people using technology and design in totally new, elaborate and exciting ways. I talk about what people are building - we try and predict what’s going to be the next big thing.

Creativity has really empowered me to do lots of extra projects in my own spare time. Once you realise that you’re able to create and have the power to create, it becomes much easier. I think after you’ve trialed a few projects - whether they go kaput or not - there’s a snowball effect which makes you want to make more and more, because you’re actively learning all the time.

My individiual projects have been both fulfilling, useful and just cool too - and it’s always nice when you get recognition for doing something different. For example, a while ago on a work exp placement I made a Internet of Things chessboard. The IoT chessboard was a physical chessboard with physical pieces which connects to the internet, so you can play with chess-players around the world. Move a piece on the physical board, and it moves the piece on the player’s screen. This was one of my first major projects and, as you can imagine, it certainly didn’t go right the first time. I think this illustrates the way creativity an technology intertwine - as a software or hardware engineer, you have to become a kind of artist when designing and planning these things.

Other projects have included a gesture control unit for controlling your computer. I was given this gesture control unit and tried to consider how I could creatively use it. It started as a creative project but ended up getting featured on UNILAD Facebook. I think people mainly liked it because it was fun and creative - it was using technology not as an add-on to our everyday life but as an enhancement, something kooky and cool.

What do you hope to be doing in five years’ time?

My main career route is engineering, so hopefully I’ll be further down that particular path. I also really hope to continue to pursue the things I do on the side, which are often more inherently creative. My hobbies such as writing, jazz improvisation and graphic design are all creative past-times which I hope to develop in the coming years. Recently I’ve discovered 3D rendering and 3D design which goes hand-in-hand with the graphic design I enjoy in my spare time.

After studying for a degree like Engineering, the release of arts-based hobbies or creative subjects has really struck me and I think this is why I've recently had a heightened interest in creativity. The lack of boundaries and binary wrong/right culture feels like a big liberation.

Which levels of Arts Award did you do, and how did it help develop your creativity or skills?

I did Bronze Arts Award. For me, it was one of those situations where you just don’t know certain things exist until you’ve been shown or taught. I learnt a lot through my Bronze award. I first learnt to use the graphic-design tool Gimp, which I’ve used ever since. I explored different arts mediums and ways of expressing art, things I’d never even considered before.

The realisation that you can create anything, from nothing, was certainly influential. Whether you’re going into engineering, medicine, arts, drama… That’s a huge life skill.

I also first blogged as a result of my Bronze Award, as a method of keeping track of progress. I started my current blog (a different one to my Bronze Award!) a few years ago, and I would attribute this as the main reason for getting my job at Hackaday.com.

What advice would you give to young people who want to pursue a similar career?

Don’t be afraid to dive in and build something creatively. Say you have a completely random and out-there project idea. Don’t nit-pick it. Just go on and build it, try and think about how you can solve the problems in the best possible way. Don’t be afriad of getting stuck in because sure, it might be a cliche, but it’s the only way you can learn.

I also think resilience is really key when you’re building your career. The best way to become resilient and grow a project-agnostic outlook is to do loads of projects by yourself. Not attatched to work, not attatched to collge. Then you know your skills are independent of the creative project itself.

If you have completed an Arts Award and would like to be profiled too, join our Arts Award Alumni and let us know about your experience. 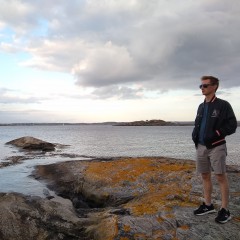 Where are they now? with Ben James

Ben explains how his Arts Award helped with his career in technology and tech journalism.