"I think political polarisation is very frustrating - I’m of the left and pro-Remain, but I’m trying to reach out in elements of this show. And you absolutely don’t get rewarded by audiences for this..."

Foremost, I’m a board game enthusiast but yes it’s true I do comedy, too, and it’s political.

It’s called “Rationale”, and it’s a political and personal comedy show about how rationality is an unhelpful concept, and that we are emotional, bodied creatures who respond more to appeals to meaning than to data. Absolute nightmare for someone whose dayjob is maths teaching, tbh.

It’s the best month of the year anywhere. Constant amazing art, theatre and comedy in my favourite city in the world. There’s also no better place to get better at doing stand-up.

The scale is completely different to anywhere else. As a performer you can go on stage 6+ times a day if you want and can see 8 shows in a day if you’re a punter.

Stewart Lee, in the most cliched answer for any comedian between 24 and 40. Massively hamstrung me as a comedian for the first two years because I didn’t realise that to be able to subvert comedic conventions you must still, er, be a master of comedic convention. So I initially antagonised audiences rather than, like, telling jokes.

My parents played the Peter’s Friends soundtrack a lot in the car in the 90s and I remember it absolutely popping. Still not seen the film.

Absolutely and it su-u-u-u-ucks. I’m frankly fed up with working up good topical material only for it to become irrelevant within 2 months. I want to monetise this shit, baby! Garlic bread doesn’t keep resigning and being replaced by someone else.

I think political polarisation is very frustrating - I’m of the left and pro-Remain, but I’m trying to reach out in elements of this show. And you absolutely don’t get rewarded by audiences for this - empathy with the other side is treated as betrayal by your own and with suspicion by the other.

The National released an album.

The inventor of the harpsichord just to see if, on the day the first one was built, it already sounded old.

Ticketed pros: infrastructure, rooms without audiobleed, an audience that is familiar with those venues

Ticketed cons: it prices out a lot of younger arts-y audiences who would be great people watching your show, can be difficult to fill a room especially mid-week if you have a low profile, almost definitely you’re going to be landed with some sweet D£BT that you’ll pay off over the autumn / the rest of your life.

Free fringe pros: significantly lower costs and all bucket money to you, livelier audiences, people willing to take a punt if you’re lower profile, getting to explain insane internecine warfare between different fringe organisations like it’s different subsections of the IRA

Free fringe cons: some of the venues can be very poor quality (though many are brilliant) 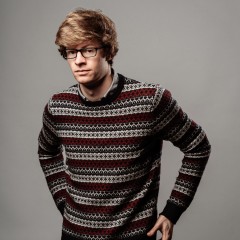 "I think political polarisation is very frustrating - I’m of the left and pro-Remain, but I’m trying to reach out in elements of this show. And you absolutely don’t get rewarded by audiences for this..."