"It’s been interesting to see that the public sentiment isn’t the same all over the country. You can end up performing in a bubble, and I need my show to work to people who might not necessarily agree with the core theme of it."

Hello! I’m Robin Morgan. I’m a 29 year old Welsh stand-up comedian and writer. I have a decent Uber rating and was once quite good at the Bleep Test before life took its course.

It’s a show about my Dad and my son. It’s about male role models. It’s quite silly and has a joke about the film The Notebook in it. It’s the best show I’ve written and I’m very proud of it.

Because it’s the best place to perform. A whole month of the same show, in the same room. I even quite enjoy flyering. Plus you’re surrounded by your peers who have all worked so hard on their beautiful shows all year. It’s magic.

The sheer scale and ambition of it. Plus the very affordable rent.

I fell in love with Russell Howard as a teenager watching Mock the Week. I applied for a job in my local comedy club in Cardiff as soon as I turned 18, worked there for six years while slowly doing open mic gigs. I saw Tom Wrigglesworth’s Open Return Letter show while working there, which blew my mind, and made me want to write longer form stand-up.

I’d been accepted onto a Journalism Masters at Cardiff Uni, which I deferred for a year, to see how stand-up went. So I probably would have done that, using my experience writing horoscopes for my student newspaper. I’d be the new Mystic Meg.

The person who decides what goes into the middle aisle in Lidl. Is that a job? Must be.

Class Assembly, Year 4. Ours was sport themed, the Match of the Day theme was played to the entire school, I mimed scoring a goal, then pulled my shirt over my head, which got a laugh, hopefully not because of my weird nipples.

I never used to. I just tried to make a funny show that the majority of people would enjoy. This year’s show is a bit different. I feel I’ve found my voice (how pretentious!) in the past year, and finally feel I can talk about subjects I care about.

Yes, but in previewing this show, it’s been interesting to see that the public sentiment isn’t the same all over the country. You can end up performing in a bubble, and I need my show to work to people who might not necessarily agree with the core theme of it.

Best Year Of My Life.

Tina Fey. I think she’s incredible. I would love to write something for her one day.

I’m doing the free because I can’t justify losing incredible sums of money in doing a ticketed show, when I have a young family and mouths to feed. I think there are more important things than comedy, and couldn’t forgive myself if my “dream” impacted the lives of the people I hold dear.

I’ve always wanted to do a ‘paid’ show, and perhaps one day I will. But I love the Free Fringe, I love that it’s a bit anarchic and people take a punt on you - people are more giving with their laughter when they’ve been pleasantly surprised that you’re not shit. The expectations are very low. What a place to come from!

Come up the year before you want to put a show on. See tonnes of shows in as many different venues as possible. Work out what will work for you. Meet the people who program the shows. I don’t think there’s any point coming up and performing a 1am slot in a venue out of the centre. It won’t be useful and you’ll have a horrible month. Come up with a support network - it can be a gruelling month, but surround yourself with positive people, and you’ll have the best time. 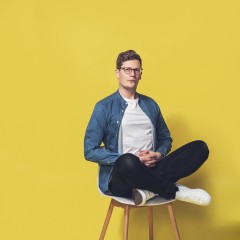 "It’s been interesting to see that the public sentiment isn’t the same all over the country. You can end up performing in a bubble, and I need my show to work to people who might not necessarily agree with the core theme of it."