"I’m a non-binary Northern drag queen with a giant belly and a voice that never dropped. Ten years ago I would’ve been laughed at, now I’m celebrated and that is due to the work of people before me and people around me."

I’m Crystal Rasmussen. I’m the heiress to the Romanov fortune, but sadly I lost my passport back in 1917 so could never prove it. I’m a writer by day — see my recent memoir Diary of a Drag Queen, published by Ebury (Penguin) — and by night I’m a singer, model and international backing dancer for Jennifer Lopez (only one of those is true).

The Anatomy of a Drag Queen: it’s all about what it takes to become a drag queen, and it’s all centred on the idea of excavating shame via various different tried and tested, successful and failed, methods. It’s brimming with live songs — from moving moments with Kate Bush to sexy bits with Beyoncé. And it’s funny. I think drag treads the precarious line of humour and politics, of frippery and seriousness and this is what this show is. Bang for your buck, as my late, great, father Karl Marx would have said.

In short: all singing, semi-dancing, glittering comedy with a gorgeous message about how to feel a little less shame.

Really, for me, the Fringe has become a home from home. I’ve been performing for 98 years — I was the lead singer on the Titanic — and so it’s just so wonderful to join my fans up in Edinburgh. But it’s also such an amazing festival for work like mine — work which you might not see otherwise. Queer work, challenging work. I adore it.

It’s not in London for a start, which for me as someone from up north feels very special. But it’s also full of amazing queer work every year. So, it feels like a safe place to take a new show like this to!

It was a semi-accident. Growing up in Lancaster I wasn’t really aware of the job of drag queen/theatre maker/writer. But at university — where I was studying veterinary medicine for my sins — I met some queer friends and together we made a drag troupe called DENIM. It was with these queens I first came to Fringe, and it was glorious. There is nothing more wonderful than being on stage and making people feel things in the moment. That’s like a major, glorious gift. My inspirations were my drag sisters, and my mum and dad.

Well, I’d probably be a vet which is a terrifying prospect. Or I’d be a mother to eleven children.

This one! Are you kidding! I get to write, sing and wear makeup and meet iconic people for my job. I am deeply deeply lucky and ecstatic that I get to do what I do. People like me from where I’m from don’t often get to do that.

When I got caught lip-synching to Celine Dion’s tour de force album Let’s Talk About Love, dressed in a black sequin and chiffon dress at the age of eight or something. That was truly art in motion. Still haven’t given a performance like that since!

Yes, but I think that’s good pressure. I think if you’re not commenting on things — whether online or in person — you’re not really awake. I do think sometimes you need space and also need to remember that nobody cares what you say as much as you do. It can feel daunting but trying is better than not speaking up at all.

Certainly. I’m a non-binary Northern drag queen with a giant belly and a voice that never dropped. Ten years ago I would’ve been laughed at, now I’m celebrated and that is due to the work of people before me and people around me. Visibility like this is wonderful but can often also be very dangerous. It’s swings and roundabouts, as my wonderful late mother Rachel Greene from Friends would have said.

Celine Dion, Madonna, or Tina Turner. Sorry had to be three. These are the icons that saved my life, that taught me how to be an entertainer, to hold a room, to be comfortable on stage. I honestly want to weep thinking about them all, so it’s really nice to have them all on board as dramaturgs for the show!

I have only ever done the ticketed Fringe. Does that make me a morally bankrupt loser? Perhaps. I’m not too sure, but I have learned to what I was advised to do- plus I wanna be rich xxxxx

Just kidding. I wish I had more to tell you other than get a ticket and if you hate the show, not just dislike or feel ambivalent towards, but absolutely HATE then I promise I will buy you a drink as compensation.

Try to find a good producer, and try to believe that what you have to say is worthwhile because, unless you’re one of those dreadful edging on far-right comedians we all know about, it’s likely you’ll say something glorious. Also don’t read reviews (unless five or one star) and don’t worry if you don’t sell out. That’s a wondrous dream, but any audience is an audience, and playing to different people each night is such a bootcamp in performance dexterity. Enjoy it!

Tragically I’m @tomglitter on instagram and twitter, which is a handle I chose at like twenty (which, again, is way too old to choose a handle with the word glitter in it). But I’m here, I’m queer, and I’ll hopefully see you in the Burg!!

You can see Crystal Rasmussen Presents The Bible 2 (Plus A Cure For Shame, Violence, Betrayal and Athlete’s Foot) LIVE! At Underbelly- Belly Dancer 1st-25th August at 5:50pm. For tickets, please visit www.edfringe.com 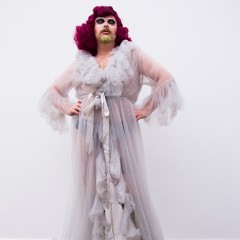 "I’m a non-binary Northern drag queen with a giant belly and a voice that never dropped. Ten years ago I would’ve been laughed at, now I’m celebrated and that is due to the work of people before me and people around me."