"I also like not being in New York in August. When it reaches a certain level of humidity here, it activates everyone's sweat and pee smells, so it's a great time to scoot."

Hello! My name is Emmy Blotnick. I'm a comedian based in New York. This is my first time coming to Edinburgh and I'm pumped as heck.

Many reasons! I like the challenge of performing every night for a month, and I also like not being in New York in August. When it reaches a certain level of humidity here, it activates everyone's sweat and pee smells, so it's a great time to scoot.

Constant television-watching. My inspirations were Conan O'Brien and Tina Fey and Beavis and Butt-Head.

I'd like to be an anchor on a sports show, but without learning anything about sports.

When I was about four years old, my mom bought me an expensive party dress that was white with black polka dots. When she left the room, I took off the dress, laid it on the floor, got a sharpie marker, and connected all the dots.

Sometimes, but being funny should come first.

Only one houseplant has died!

There are a lot of things I'd like to ask Prince.

This is a great question for someone who knows more than I do!

I would advise them to ask others for advice, and then tell me that advice.

I'm @emmyblotnick on Twitter/Facebook/Instagram/YouTube etc., and my album "Party Nights" is available on Spotify and iTunes!

You can see Emmy Blotnick: Party Nights at the Underbelly Buttercup from 31st July – 26th August (not 13th) from 7:55pm. For tickets, please visit www.edfringe.com 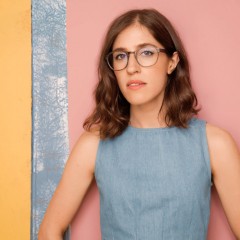 "I also like not being in New York in August. When it reaches a certain level of humidity here, it activates everyone's sweat and pee smells, so it's a great time to scoot."