Hello! I’m Daniel Audritt and I’m writer and comedian who lives in London.

“Better Man”, is a stand up show about Love, Relationships and Masculinity.

Last year I found myself in a relationship that I really, really want to last and that has made me really examine myself, my previous relationships and myself as a man. I’m a guy who loves RomComs, but they’ve taught me a lot of negative lessons when it comes to making relationships work.

Masculinity is obviously a big topic at the moment and something I’ve been very interested in. So I talk a lot about trying to be a “Better Man” and really look into what men have to do to be better in 2019, as well as looking at the social reason for why people act the way they do…

It is a comedy show though, so I’ve packed it with jokes I swear.

Performing at the Fringe is the best experience. As a UK comic, it’s the only time where you can run around and do between 3 and 9 shows a day every day and if you do that then you end up progressing more in a month than you do in the other 11 months of the year. So for me, it’s all about getting funnier and better as a comedian, and there really is no other place where you can do that to the same extent.

The audiences. There are so many people at the festival that it literally takes over the city. There are so many great fringes across the country but nothing competes in terms of the sheer volume of people. I love how the city has just learned to accommodate an ever growing number of audiences and shows too. It’s the only place where a room that has been used as a storage cupboard for bikes and washing supplies is now a 20 seater venue where someone is performing slam poetry about the dangers of climate change.

It sounds overly simplistic, but I love making people laugh. I’ve always been such a big fan of comedy and watching groups of people laugh together is one of the best feelings in the world. Whether it’s at the TV, a stand up, a play, even just seeing someone sat on the tube laughing at a book they’re reading is lovely to see. So that is and will always be my big driving force.

When I was growing up, the biggest influences were Monty Python and Vic and Bob, because my dad was a big fan of each of them and the Two Ronnies and Dave Allen who my mum loved. I was also obsessed with Wayne’s World.

If I didn’t have my currently job then I’d be desperately trying to have my current job. Since I left uni I’ve been trying to be a comedy writer, whilst working various other jobs until I could do it professionally. Knowing me, I’d have just kept doing that in the hope that it’d work out eventually.

Also, that worry about eventually going back to working other jobs too is one of the key driving forces.

Honestly, the exact job I have now. I’m a comedy writer/director and comedian and that was all I ever wanted to be.

Last year my writing partner and I made our own Comedy Central sketch show called Modern Horror Stories, which was the hardest but best few months of my life. We’re now working on lots of TV projects, which I’d love to get to make too.

But basically as long as I get to create comedy in some form, then I’m pretty happy.

I’d also love to write for Saturday Night Live, so Lorne Michaels if you’re reading this then I’m available and willing to relocate.

I honestly have no idea… I’m not from a family that are particularly “arty”. We didn’t go to galleries or the theatre very often and the only plays I was in were school plays, written by my French teacher, where I always played the character who couldn’t speak any French.

I think the first time I remember “creating” something was a little book I wrote that I gave to my mum and nan. They both enjoyed it but told me how bad my spelling was. I’d like to say my career is different than that now, but I tend to get the same feedback on my scripts.

I never have before, but this year, the topic I was personally most interested in was masculinity, which has become the main topic of my show. I never set out to write a socially conscious show, but I have certainly written a show which is aware of the current social climate.

That being said, I’ve really tried to keep it a comedy show more than a social commentary. Personally when I go to see comedy I want to laugh and if I’m made to think or learn something then that is a lovely bonus, but the laugher has to be the main thing. And whenever I speak to audiences at the fringe they echo the same sentiment. So for me, I never want an audience to leave thinking that I didn’t at least try my best to entertain them. After all, it’s all about them, not me.

I don’t think there has been any shift that I’ve felt personally, but then again I’m not in the game of trying to shock people by “tackling” edgy topics.

It might affect other comedians more than it affects me, but personally whenever a comedian says “I can’t joke about XX” any more, my first thought is “how good was your joke in the first place?” Because I’ve heard great comics joke about literally everything, and because they’ve put enough thought and work into it, then they’ve managed to make it work. The only time it’s not going to work is if it’s a) not funny, b) not clever or c) hate speech…

Best one yet (personally).

Garry Shandling. I think he’s one of the most inventive comedy writers who has ever worked in the industry, and by all accounts a complete perfectionist. The documentary that Judd Apatow made about him was so great and portrayed him as a complete artist striving to make the best comedy but also to use jokes as a method of expressing truth.

I’ve always performed in free shows, which has been great. I think they are brilliantly run and give both performers and audiences a chance to see and perform in shows that they wouldn’t usually do if money was a factor. As a new comedian that’s great, because people are only risking their time on you so the pressure isn’t quite as high as if they were paying.

This year, however, I’m doing a paid venue. I’ll be doing Just the Tonic at the Caves, which is a pay what you want or pay to reserve a ticket system. I know the Caves and they are great, so I’m really looking forward to seeing how that is.

You’ve had 11 months to work on this show so it better be something you’re proud to show off. Now you’ve done all the hard work, enjoy it - you’re taking part in the best festival in the world.

Oh, and don’t get caught up in thinking that the buzz, awards, reviews and all that actually matters. They do, but only for one month. There are videos of cats on the internet that are relevant for longer than that. I say this, but I’ll 100% consider quitting if I read a review that says I’m not very good. 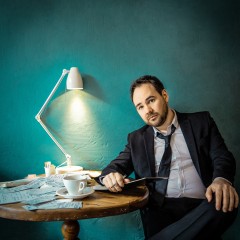