"I think social media can get quite aggressive, some people feel indestructible behind their device and some pretty horrible stuff gets spouted."

Hello my name is Clare Pointing, I’m 34, this is my 9th fringe and I recently became a mum. My daughter is called Rae and this will be her first fringe experience (outside of the womb)

A series of talking head style monologues. In this show you meet six different women, who are sharing a small glimpse into their everyday lives, warts and all. They will make you laugh, cry and cringe.

I have been performing at the fringe for nearly 10 years and it feels like a second home. Whilst it comes with its highs and lows I keep coming back so I guess that speaks volumes. Some of the most incredible memories have been made here and each year is different. I’m really looking forward to performing a show I love to new people every day.

This is a festival that you live, breath, eat and sleep, it completely consumes your life for a whole month. Like a colourful busy bubble floating around the rest of the earth.

My mum always exposed us to the arts, whilst she didn’t ever pursue it herself deep down at heart she is a performer herself and both my brother and I have inherited that desire to express ourselves in this way.

This is a really hard question, I’m constantly imagining different career choices… what else I might like but it has never remained the same. At the moment I like the idea of being an Olympic swimmer… it’s not something I’ve ever been capable of doing but I like the idea of it. But in terms of what I’d probably be doing it would have to be something on my feet, I’m not very good at desk jobs, I get the wriggles… By the way I’ve already gone off the swimmer idea.

Oh ok…I should have read this before answering the above. For something new though I’d say a children’s story book author, yes, I mean this one more than the swimmer one.

My mum used to take us to exhibitions, we didn’t have much money but my mum was a hero at finding free events to keep us entertained. Galleries were one of these things, we used to love the big open space. She would ask us if we were allowed to take one picture/sculpture home to have as our own which one would we pick? It meant we really looked at them all and got us chatting about what we liked or didn’t like about what we saw.

Yes, but generally I don’t engage, I tend to save these conversations for face to face interactions as I think social media can get quite aggressive, some people feel indestructible behind their device and some pretty horrible stuff gets spouted. On the other hand, I really admire people who are good at it, I suppose anything that spreads word and raises awareness about injustice is a good thing. It just doesn’t really suit my personality as a form of communication.

I think during the lead up and since we voted on Brexit there has definitely been a shift in public sentiment, there is a very palpable feeling of unrest. In my opinion, more people are spouting what I would consider to be offensive views and I find it all a bit terrifying especially as a new mum. It has affected the writing of my show hugely.

Victoria Wood, I love human observation and the humour that comes out of this. Her writing and characters have defiantly been a huge inspiration to me and my work.

Free Fringe means people with a really low budget can take a show to the fringe. Without this, the festival is very difficult to take part in unless you have the funds, which arguably goes completely against the point of a fringe festival, which was originally created for emerging artist to try out work. It should be available for all people and the free fringe has helped with making this possible. A lot of free fringe shows have a bucket on the door, but unfortunately not everyone donates. However, from what I can gather, generally it’s proving to be a more lucrative way of doing the fringe these days. This is a complex one but I also think ticketed shows are important as they keep the value of a show, we work hard as performers to create work and selling tickets is a way of valuing this work.

I would say it’s good not to expect the fringe to change your world afterwards, I have seen some incredible shows over the years and sometimes they just don’t take off in the way they deserve to. So instead, go for the experience, to meet people, to see other shows and then if big things happen this is just the cherry on top. 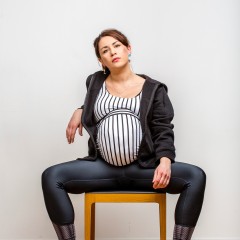 "I think social media can get quite aggressive, some people feel indestructible behind their device and some pretty horrible stuff gets spouted."