Hello! My name is Verity Lane and I am an artist, composer, creative director and writer from Tottenham. I lived in Japan for ten years, and specialise in creating works that explore traditional Japanese arts, instrumentation, aesthetics and beyond.

My show is divided into two parts: Origami Soundscapes and The Crane. Part 1 explores the traditional Japanese art form of origami with music and words in a fresh and modern way. Coco Sato will be performing live, creating origami structures of varying sizes before the audiences very eyes. She will be providing the visuals for my stories which depict memories of Japan as well as Japanese birds (the Japanese nightingale, blakiston owl and the crane) as well as my music (scored for shakuhachi and percussion and performed by Kiku Day and Beibei Wang).

The second part is a bite-sized opera installation re-imagining the story of The Crane’s Return Favour - an infamous Japanese folklore about an injured crane that takes human form. I have taken lots of inspiration from Japanese noh theatre, therefore expressing the narrative in both Japanese and English as well as dance, music and animation. This is my debut into the world of opera, so I am keen to present my take on the tradition and explore new avenues as well as a multimedia approach.

I first wanted to become a musician when I saw a string quartet playing Mozart’s Eine Kleine Nacht Musik on the Southbank when I was 6 years old! I was so mesmerised by the performance that I begged my parents to play the violin for about 6 months. They eventually gave in and bought me one; I started to compose short pieces by myself exploring textures on the instrument shortly after. When I was around 10 years old the late Indian-composer John Mayer took me under his wing and I really developed my style - we focused a lot on writing for non Western instruments as well Western classical music - it really was a valuable experience for me.

I have no idea - I try not to think about it!

At the moment my dream job would be to write the music and creatively direct an extremely experimental and avant-garde ballet piece based on Japanese folklore. I also plan to turn my opera to a larger and touring production.

I remember drawing a still life of flowers at school in pastels - think my mum kept it!

I don’t feel any pressure as such, but I try to focus on my art, exploring societal themes etc subtly within my work, I think like most artists.

I’ve always found people incredibly supportive. I am extremely niche, so I think it’s a case of whether you understand it or you don’t. I try to be extremely inclusive about how I market my work - especially on performance days - as I hope to continue attracting a diverse and open-minded audience base. I always appreciate people taking the time to come and experience my work firsthand. It’s a tough industry, so I really treasure the support I’ve received for my previous projects - it really is valuable.

I would love to work with John Cage! I would be interested to experience his music and installations firsthand (how did people really respond to his works? etc) and also learn about his thought processes as he was very influenced by East Asian culture. It would be amazing to collaborate with an artist like him! 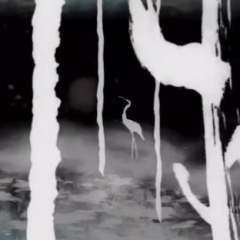