"Even though each time I’m having a meltdown, it pushes me to create a new show each year, standing side by side with other performers from all over the world."

I’m Camille O’Sullivan half Irish/French singer and actress who hails from Cork Ireland. I interpret the stories/music of Nick Cave, Tom Waits, David Bowie, Radiohead, Leonard Cohen, Jacques Brel – finding characters in their songs I can inhabit and make my own. I choose not to imitate or be like the original recording, the nicest compliment is “When did you write that?” I am emotional person so I look for that in the song or like an actress singing a monologue, you tell the story making it your own. Can be quite chameleon and emotional, very dark, very light then be fun/joyous, all life’s madness showing the different aspects of yourself. “There is a crack in everything that’s how the lights gets in” (Leonard Cohen) sums it up.

This show is a sort of love letter to Nick Cave and the Bad Seeds, whose music I’ve loved forever. He is the finest storyteller and has written some of the most beautiful bittersweet songs and explosive feral rocks songs. Exploring his work, the sacred, profane, poetic, feral, preacher. There is a rock band on stage with Feargal Murray on piano, at times hymnal and spiritual intimate ballads and then exploding it with some joyous madness, darkness and rocking out. Also, we revisit his work over all the years, leaving the last songs be a homage paying respects to his beautiful last album.

Ahh, why do I want to put myself through this mad endurance test! This is my 14th year performing since 2004 (when I first brought two shows the Dark Angel and Brel, and was original performer of La Clique) and though each time I’m having a meltdown, it pushes me to create a new show each year, standing side by side with other performers from all over the world.

This is a shop window for promoters to come see you with the possibility of you touring all over the world with that particular show, festivals and great venues. The theatre, comedy and music world have their eyes on it, and reviewers come, but mostly it was the first festival where I felt maybe I’m good enough to tour abroad and have career in this mad business.

Magical things like performing The Roundhouse, Apollo, Sydney Opera House, Later with Jools BBC, touring with the RSC, the film Mrs Henderson Presents all came about from being spotted in Edinburgh over the years. The financial (and emotional) risk is big but really worth it when something magical comes out of it. I Realised all those years ago you must take the risk…

I also loved seeing a lady called Agnes Bernelle in her 70’s perform old German songs and becoming each character, which is essentially what I do now – inhabiting each song and it’s character, allowing you to tap into all different aspects of yourself and be chameleon on stage!

Think I’ve worked backwards in a way. I’ve had a few careers already, I was a portrait painter, a qualified architect working several years, and lectured in university, and then becoming a singer and actress.

Probably like to shut myself off in a room and become a painter again. I love that solitude and it’s a perfect tonic if you are a shyer person who just happens to perform in front of lots of people for a living. What was I thinking of!!

Around 4 years old, selling home-made tickets for a ballet show in our living room with my parents for audience, where my sister and I did all the different characters, prince, rat, swan, mother…hiding behind the sofa for costume changes.

I think a lot of the artists I sing are social commentators (which is why I am drawn to them), holding a mirror to what is going on around them… and there is decision I make to lead it into my shows. The last show here was called “Where are we now?” the question Bowie posed. It related to the world where are we with the madness going on it, but also where are we personally since some of those great artists are gone. For example, Let England Shake (PJ Harvey) God is in the House (Cave), The Future (Leonard Cohen), Crack of Doom (Tiger Lilies) and a little bit of Oompla Ooompa played highlighting a certain over-tanned person in the US

Eeek! Obviously the people I was and am a big fan of: David Bowie, Leonard Cohen, Nick Cave, Tom Waits, Radiohead. Why? They’re just incredible inspiring performers and have mind-blowing music. I wish I had the balls to contact them to collaborate, especially the ones who are gone now!

Not sure which is better, personally I have always done a ticketed event as I need to pay a band and backline, and I also feel as a performer I should get paid. I feel a free show would leave me vulnerable. Sometimes having a good ticket price means the audience respect you more, sadly that certainly seems the case when I’ve done stuff for free in the past…

Spend worthwhile money on great publicity pictures, PR and marketing. I lost a lot of money the first year and never have since I decided to invest in the above. Keep your mad partying for the last week, it is a bit of a physical emotional marathon! 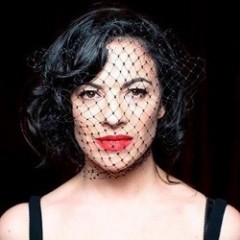 "Even though each time I’m having a meltdown, it pushes me to create a new show each year, standing side by side with other performers from all over the world."