"Work hard at your show and make sure it is tight. Then do a proper budget and business plan early to manage your expenditure."

My name is Magical Bones and I'm a magician and hip-hop dancer.

The show is called Black Magic, and it is a unique magic show that celebrates historical black magicians and challenges the pre-conceived notions of what black magic really is. The show was inspired from the story of Henry “Box” Brown who was a former slave that escaped to freedom on 23 March 1849, by mailing himself in 3- foot-long wooden box from Richmond Virginia to Philadelphia Pennsylvania, where slavery was abolished.

I believe the Edinburgh Fringe Festival is one of the biggest platforms in the world to showcase new work. I also think that due to the number of different types of acts and performers at the Fringe, it can be a good place to develop new ideas.

I think it is one of the oldest festivals and most established festivals in the world. However, even though it is a very big festival, it is also very intimate because access between performers, agents and the audience is very personal and direct. So, it’s not uncommon for you to be performing for the same person you'd just met in the pub an hour before your show.

I have always loved performing and sharing my magic with people. I was inspired by great magicians like David Blaine and Harry Houdini, who push the boundaries of what is humanly possible.

If I didn't have my current job, I would probably have become a maths teacher because I studied maths in university.

If I could have any other job, I would become a video director because I love making and editing video content

I think that because of social media a lot of information is widely spread, therefore this allows me to tell better stories within my own, i.e. themes that have a message.

Gruelling, tough, passionate and self fulfilling.

I would have loved to work with Prince because he was a brilliant artist that was very diverse in his talents, and he always thought outside the box.

A performer could do a ticketed event to get a sense of the market value of their show, and a performer could do the free fringe to test out new material and see how the audience responds to new ideas. A ticketed event allows you to make money if it is successful, however, you could potentially lose money if it isn't. The free fringe allows you to get exposure and test out new material, however, you won't make as much money if it is a success because the audience aren't obligated to pay you.

Work hard at your show and make sure it is tight. Then do a proper budget and business plan early to manage your expenditure. 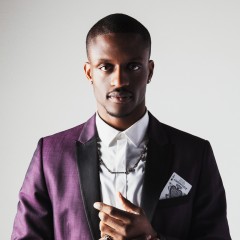 "Work hard at your show and make sure it is tight. Then do a proper budget and business plan early to manage your expenditure."