My name is Liza I’m a stand-up comic in the states. I started in Chicago, been in New York, and am currently without a residence. I’m doing a cool world travel type thing at the moment and my old apartment had carbon monoxide poisonings, gas leaks, squatters and racoons living in the roof. I like pop female music divas, games, gossip, hotels, rooftops, and spending money. I have a Netflix half hour special as part of The Degenerates.

Lots of bits, crowd work, with a little heart. It’s about the time in between starting therapy and learning a lot about your problems and doing something about those things. Like now being aware of all these destructive patterns and where they come from and not doing the right things to make my life better. Like I’m preventing myself from having what I want. All the problems have amassed and some effort needs to be put in. I also talk about have soviet foreign senior citizen parents in America, and then I always do some jokes about cum and feminism.

I’ve wanted to do it for years. I’m thrilled. I can’t wait for the challenge and to test the limits of stamina and excited to see the progress I can make with the set. Everyone has let me know that I’ll have fun but also cry so I can’t wait to go on an emotional quest. I also love being in a new place for that long because you can explore slowly and find your favourite spots and really enjoy everything while also being able to sleep in. Also, like, lets party!

From the ones I’ve been to this seems to be the biggest and all-encompassing of different types of shows and so international. I’ve never done a fest for a full month and so many hours in a row. Also, what’s new for me is the stars and reviews and theatre element of it. I’m jazzed. Oh, and it costs a lot to play ya know.

I didn’t realize it was an industry or a thing really when I started. I was invited to go watch an open mic by someone I knew from high school and then I went up that night and bombed and then came back the next week and did good and was like oh this is fun. I did music mics for a week and then finally Sunday night went to a comedy open mic and met all these other comics and was like ohhhhhhh this is a thing. Then did more mics and slowly learned with fun opportunities that it could be a job. I don’t like to work and this feels like the least amount of work to do. It’s just chatting and having opinions and making fun of things and people and travelling and it’s different all the time and you can wear what you want. I mean it’s a dream life. The comics I’ve looked up to and learned lessons from have been Dave Attell, Nikki Glaser, Hannibal Burress, and Tom Segura.

Most likely I would be a salon receptionist and living on a budget and drunk all the time. What I wish I could do is solve crimes. Detective. Evidence. Forensics. Clues. When I was younger I wanted to be a prison psychologist. I would just hate to ever have to go to school again.

I like being a comic. I have my dream job. I’d like to produce and make things too.

I remember seeing George Seurat’s ‘A Sunday Afternoon on the Island of La Grande Jatte’ at the Art Institute in Chicago and feeling wild pretty young. I had to google the name btw I just remember it as the dots at the park with the poofy dress.  I’m also grateful to my elementary school art teacher Mrs. Smith, she really taught me a lot about art.

I don’t know if you consider this art but my first TV show memories are The Three Stooges and Baywatch. The first play memory I have is Brighton Beach Memoirs at Northwestern University. First stand up was Jay Leno at a Jewish fundraiser.

I don’t fully understand this question so I hope this answer is what you’re asking. I do feel there is an increase in people clapping when they like the point you’re making it and it makes me cringe. Like if they’re clapping they’re not laughing. You can clap after you laugh but I hate no joke claps.

I really wish I could’ve met Joan Rivers. It makes me sad I can never meet her. I’d love to do her interview show, In Bed with Joan Rivers. She’s just the queen. Mean and quick and hardworking and a trailblazer in every way.  Badass Legend.

Honestly, I just do what my manager tells me to do and I like to do the least amount of non-comedy related things as possible, so having a producer and people doing things so I don’t have to fill out forms or email is a plus. I have friends that have done both and enjoy the free fringe a lot but are happy they had a ticketed produced show their first time since it’s so overwhelming to do it your first time and why make it harder?

I can’t give advice since I’ve never been.

You can see Liza Treyger: In The Weeds at Underbelly Buttercup from 31st July – 65th August at 10:35pm. For tickets, please visit www.edfringe.com 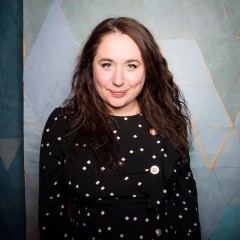