"I prefer to take a moment to reflect on my thoughts and try and see every side of the equation before and if I commentate. I believe in today’s society people are to swift to react."

Could you first introduce yourself to the reader?
Hi! My name is Darius Davies, I am an anglo-Iranian stand up comedian who has toured all over the world. I bring an American style with a bit of English flair, and a touch of Iranian eccentricity. I have a unique perspective and voice.

As Edinburgh gets closer, and global events continue apace I would now describe my show as vitally important. Not only is this show very funny but with the rise of fake news, “the weaponisation of social media” and the arrival of deep fake – I truly believe this is a must-see show for anyone who want to see how easy it is to manipulate the media.

As a comedian the Edinburgh Fringe Festival is like our FA Cup final, our end of season showcase. It is an opportunity to show what we’ve been up to over the past year, introduce ourselves to new audience and get out of comfort zones of just doing club 20s, and a chance to get to explore deeper more complex subjects. Plus it’s amazing fun!

Edinburgh is different to all over festivals that I have done, because it completely takes over the city – there is something to do or see and every moment of the day, from the moment you wake up right until you go to bed. The whole city comes alive and is buzzing.

The first time I saw Eddie Murphy Raw at school, I couldn’t believe how funny he was – I didn’t even know about stand up comedy, let alone that he was one! I’d always admired him. Many years later in New York I had to do public speaking course, and for my speech I decided to try and do stand up. I remember it going well (though it was probably awful!).

Afterwards a friend told me I should go to an open mic, and do some gigs. I didn’t even know what an open mic was. I went, I died. I then did this for many years! My comedy inspirations are: Eddie Murphy, Chris Rock , Mitch Hedberg, Dave Chappelle, Bill Burr, Bill Bailey and Flight of the Conchords.

Either finance or some boring temp job.

It would still be comedy, just earning enough money to not always be perpetually broke!

My brother drawing cars – he was an excellent artist mean while I was rubbish. So I would tell my friends I could draw amazing cars, then ask my brother to draw me one to show them, which I would claim as my own. Of course I could never draw it in their presence because that “would put me off”.

Not really I try to only commentate on something I have an opinion on, and with more polemical events I prefer to take a moment to reflect on my thoughts and try and see every side of the equation before and if I commentate. I believe in today’s society people are to swift to react.

I believe as a comedian you can talk about whatever you want – however you need to very precise with your language so that it cannot be misconstrued or taken out of context.

Leonardo De Vinci. Seems like that would be a cool person to work with and not a waste of my hypothetical time-traveling pick.

This is my first year doing a ticketed event, so I can’t say for certain yet – but I am expecting a slightly more attentive audience, who are invested in the show and haven’t just wandered in because it’s been raining. I also believe amongst the “industry” they take ticketed shows more seriously and are more willing to write stories or review them. I don’t agree with this as there are loads of good and if not better shows on the free fringe.

The benefits of the free fringe, is you don’t financially cripple yourself producing a show and can even make a little bit of money, if your show is good! If you get the right room and time, they can be as good as any on the paid fringe too.

Try to make your show as slick and well produced as possible  - I don’t think audiences care whether you are a complete newbie or a seasoned veteran, they are investing their time in you and if they think you are not trying or not investing yours, your show will probably be rubbish.

You can come and see my show Darius Davies: Persian of Interest at 2:20pm at The Tron.

Darius Davies brings his new stand up show ‘Persian Of Interest’ to the Just The Tonic Tron for the month of August at 2.20pm each day for tickets go to www.edfringe.com. 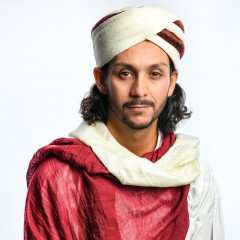 "I prefer to take a moment to reflect on my thoughts and try and see every side of the equation before and if I commentate. I believe in today’s society people are to swift to react."