"It’s about hating your friends and, occasionally, liking your enemies. It’s a tightrope walk between honesty and cruelty, open-mindedness and naiveté, self-awareness and self-loathing."

Certainly. My name is Sara Barron and I’m an American standup based in the UK. I did my debut hour last year, and this year, I’m coming back for seconds.

Broadly speaking, I intend it to be a rip-roaring hour of hysterical, well-observed standup. 60 minutes of your life that felt like 20, and that you hoped would last longer than it did. More specifically, it’s about hating your friends and, occasionally, liking your enemies. It’s a tightrope walk between honesty and cruelty, open-mindedness and naiveté, self-awareness and self-loathing. I spend the bulk of the hour working to convince you of the power of negative thinking. (I’ve been told more times than I care to count that I have an American energy/delivery mixed with a British sensibility. I choose to take this as a compliment.)

It’s the biggest and the best and also the most competitive.

I started standup relatively late, right after turning 35. I’d wanted to do it since I was in my early 20s, but was too afraid. Some people have that confidence when they’re young, others among us need to wait years to get it. Anyway, my husband was the one who continuously nudged me toward it until I finally bit the bullet and signed myself up for an open mic night.

Well, before starting standup – before it moved from hobby to a proper job – I was mostly a stay-at-home mom. So. For better or worse, at this very particular juncture, I’d probably have more time with my kid.

Standup really is pretty great, and I’d be very happy to keep doing it. If there was some way to completely reinvent society so that people went to comedy clubs on their lunch break instead of in the evening – this, of course, would insure I worked afternoons instead of evenings – that would make it even more ideal. I’m not holding my breath, however.

My mom used to make playdough for my brother and me. So probably something involving weird homemade playdough that was not nearly as nice as the kind you buy in the stores. (That store-bought stuff was always cool and colorful, and the stuff my mom made looked… I mean, it just looked like regular dough.)

Absolutely not. That’s not my skillset. Frankly, it’s not most people’s skillset, but I try to be self-aware enough to clock what I can and can’t do.

Yes. Broadly speaking, all decent people in the world are now trying to be more aware of/sensitive to people who’ve had experiences that differ from their own, and I, personally, am trying to follow suit.

Describe the last year in 5 words or less?s

Had a kid and started standup. (6 words!)

I think Chris Rock is this total and absolute genius and pretty much everything I aspire to, so at the moment – with an Edinburgh show looming – my dream sitch would be to have him come to an upcoming preview and give me notes and fix all my various problems. (Also, obvi, in this dream sitch he tells me what a talented lady I am, and that I’m adorable and very charming.)

Ticketed events tend to be better organized and more often than not better attended, but the free fringe doesn’t cost you nearly as much money. It’s sort of a question of how much you’re willing to gamble on yourself.

Make it good. Don’t phone it in.

8:30 pm at The Pleasance Upstairs.

Sara Barron’s new stand up show ‘Enemies Closer’ will be at the Pleasance Courtyard Upstairs 8.30pm nightly for the month of August for tickets go to www.edfringe.com 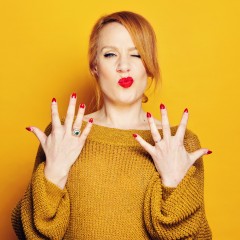 "It’s about hating your friends and, occasionally, liking your enemies. It’s a tightrope walk between honesty and cruelty, open-mindedness and naiveté, self-awareness and self-loathing."