"I did that for a few years, then decided to run away to China."

Hello, my name’s Bethany Heath and I am the writer and performer of Definitely Louise which is a play at the Gilded Balloon Rose Theatre during the Fringe. I’m also a PR for Impressive Pr.

As well as acting, I’m also a publicist for a lot of other shows up here so a typical day is juggling the two. I usually start with coffee and emails and getting on top of all things PR, before going to the gym and doing any other errands that need doing. I’ll then come back and pitch some people and do phone calls whilst also checking if there’s anything I need to do for my show in terms of prep. Then I’ll leave the house around 11 to go to London for school (I go to Identity School of Acting) and do more emails on the journey. In London I’ll probably find a coffee shop to continue working before doing a rehearsal for Definitely Louise and then going to class. I finish really late and head to my friend’s to stay, shovelling crisps in my mouth for the tube journey before I get there, do some quick yoga and bed.

Acting is great because it’s fun! That’s the main thing, I know there other great things but mostly it’s just more fun than other jobs I’ve done. In terms of PR, you get to meet so many great performers and people and you sometimes end up in some pretty weird situations too.

And what are the things you don’t like or find challenging?

PR can be really challenging. When you really believe in someone and aren’t finding the connection with the press but when you do get them an opportunity after loads of work towards that point, it can also be great.

What has the highlights of your career to date?

PR wise highlights would be swigging smuggled Moet out of my sleeve at Hampton Court Palace watching Ringo Starr in the rain, that was a weird one. And being a Somerset girl when I did The Wurzels’ Christmas album campaign and they dedicated West Country Girl to me on stage, or when I rode in a taxi around London jammed between two quite large Wombles.

How did you get into PR? What was your career path to this point?

I’ve been doing PR for around 10 years now. My degree was in Cinematography, but technically the whole thing was called Media and Communications, so I used that title to get an internship at a political property corporation because I had a background in politics. When I’d finished that I applied for other internships and got down to the last two at a music management company. I didn’t get it but I knew by how disappointed I was that I wanted to be in music. I then got an internship with Republic Media doing music PR, and the day I started someone else also joined, and it was their job to set up the online department. They left within a month and I was given temporary custodianship of the online department which then turned permanent. I had to make everything up but it meant I got thrown in at the deep end, and made all of my online contacts from the ground up. Online wasn’t given much credit then but I had a lot of freedom because no-one knew any better. I did that for a few years, then decided to run away to China. When I came back I was offered the job with Impressive which started out as mostly music. When I started to do comedy, I found I much preferred it, and started to move over to doing majority comedy, although I still do music from time to time.

Edinburgh the first time (or the first several times) was hard. It’s incredibly intense and there’s no let-up, but if you get the nominations come in at the end, and comedians having really good runs, it’s worth it. I get so insanely proud of them because you’ve been with them throughout all the ups and downs of the run and y’know, they’re my mates, I love them!

Outside of publishing you are also a writer and performer. Your debut show, Definitely Louise is heading up to Edinburgh. What is it about?

It’s really about being a young woman today and what that entails. It’s about all the different pressures that come from everywhere but that you take on board and judge yourself and how you’re trying to be everything whether or not that’s actually what you want. It’s funny though! It’s mostly just ranting about all the people she thinks are idiots.

You took the show to Brighton Fringe. How was the reception? Was there any particularly useful learning points?

The reception was really good! We had a great time. It was so useful for us, just to get used to the logistics of loading in and out with our set and working with the technician so that was all really helpful. Mostly though, it was just so much fun to be a part of that buzz with other shows and performers.
What was the creation process like for the show?

The creation process was really easy actually. I tend to only write when something comes to me, which I definitely think is the luxury of the novice. When you’re under pressure to follow up I’m sure that’s a different story but this just sort of happened. I wrote it and then it sat there for a bit until I was like ‘Right, I have to actually try and do this’.

Did you run into any difficulties when writing the piece?

What have you enjoyed most about the show?

Just being able to do it! I have always wanted to do this and have been on the other side of the process so being allowed to stand there and do it every day is just a dream to me.

You’ve been granted the ability to send a message to 16-year-old you. What do

Loosen up, chill out. It’s still the same advice I need to remember now.

Do you have any advice for young people interested in either performing or PR?

Both takes a lot of long hours and low pay so you’ve got to want to do it and be ready to compete with other people to do it. Be nice to people and work hard and hustle.

'Definitely Louise’ will be at the Gilded Balloon’s Rose Theatre for the month of August for tickets go to www.edfringe.com 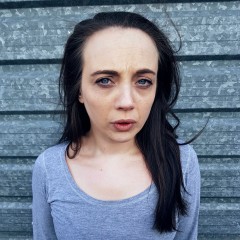 "I did that for a few years, then decided to run away to China."