I had clients as a student psychotherapist and figured it wouldn’t be a great experience for someone to see their therapist up on stage in a club one night.

Milo McCabe! Also known as Troy Hawke, everyone’s favourite home-schooled 1930’s throwback scrabble-based investigator.  If you haven’t heard of either of those, basically I’m a character stand up.

‘Tiles of the Unexpected!’ is the presentation of an unlikely theory backed with monstrous torrents of proof. There are lots of twists and turns prior to a sprint finish at the end. And it’s very funny.

I love the pressure of getting an hour together every year and the way a show evolves over the month. It improves you as a performer and writer and for me personally, keeps my club set fresh as I get to continuously update it with the new material over the year. Also, by the end of the fringe you have a show that is ready to tour and just as you start to tire of that one the next festival looms and all of your creative gears start mashing again. It’s a grinding but lovely and rewarding hamster wheel that I would feel lazy and unproductive without the pressure of.

I played Perth Fringe World out in Australia earlier this year (nominated for the main comedy award thank you very much… didn’t win obviously, otherwise why mention a nomination) and that was the first month long fringe I’ve played that wasn’t Edinburgh. It was great fun but there’s a tangible static to Edinburgh during the fringe, like an extra level of energy I don’t really feel anywhere else. It’s hard to describe, maybe like the WiFi signal of everyone’s excitement or something.

I entered stand up almost by accident. I ran a night and an agent at the time whose acts I booked suggested I have a crack myself. I did a five spot and was dreadful but she basically signed me to the agency immediately. I was dreadful for ages but took the knocks and learned some lessons (neither of which ever stop ever). I actually love the fact that you can never stop learning and getting better.

Prior to being a stand up I trained to be a psychotherapist, and quit my Masters course when I started doing regular gigs. I had clients as a student psychotherapist and figured it wouldn’t be a great experience for someone to see their therapist up on stage in a club one night. I would definitely still be doing that and might yet if I ever lose my love of performing comedy.

This one. I genuinely can’t think of anything I’d rather do. This, but with bigger tours and venues please.

Doing a collage as a young kid and sticking a on piece of paper that overlapped the edge of the card we were working on. The art teacher thought it was a very progressive thing to do as it gave the piece a feeling of ‘leaping off the page’ but I’d just not been arsed to trim it properly.

Not so much pressure… more like if there’s a point I want to make in relation to recent events I like looking for a roundabout way to make it… saying something without actually saying it but letting people find it. There’s a lot of that in the new show.

I think there’s been a shift in public sentiment and awareness that’s rightfully affected a lot of folks output and that’s as it should be. I’ve definitely found myself more aware of my output and the ramifications of it as well as delighting in finding those areas where you can touch upon things that sound like they should be offensive, or could be, but aren’t. There’s a lovely moment sometimes when I can feel an audience pause for a millisecond before collectively realising ‘oh no, that’s ok’ then laughing.

I think maybe Peter Cook. He and Dudley Moore were responsible for me being out of control laughing on numerous occasions and I just found him so incisive and brilliant. There was so much mischief about him…and cruelty too sometimes, but such an incredible turn of phrase.

On the free fringe with a good show and venue, you can make excellent money. I had both last year. I had a wonderful free fringe room with over 100 capacity that I was filling every day with a show I loved and it was extremely profitable. The flipside of that was that I got no reviews whatsoever and there is a feeling of flying under the radar. Audiences at the free fringe are lively, appreciative but also unpredictable. I am at a ticketed venue this year though, so will definitely find out what the difference is!

Preview the hell out of it, don’t rest on your good previews, use previews to experiment as much as possible with the content and running order and don’t settle for anything that doesn’t or wouldn’t make you laugh personally

I’ll be on at The Dexter Room, Underbelly, 5.30pm from 31st July – 25th August with my new show Troy Hawke in Tiles of the Unexpected for tickets go to www.edfringe.com 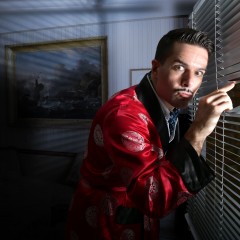 I had clients as a student psychotherapist and figured it wouldn’t be a great experience for someone to see their therapist up on stage in a club one night.