I am Martin Burton founder and director of Zippos Circus. My circus work started 47 years ago and initially as slapstick clown I worked only in theatres. I moved towards traditional tenting circus in the 1980s having trained as an acrobat with the fabulous Johnny Hutch. Now, after over 30 years producing Britain’s best and favorite circus, Zippos Circus, I have returned to my roots in the theatre with the help of theatre director Julius Green.

Cirque Berserk is the real circus show, whose is cast involves multigenerational Circus artists plus the best of the new circus artists from circus schools around the globe. No other Circus show in Edinburgh will be so firmly based in the skills and techniques of traditional circus which have been skillfully adapted for use in a theatre space and cleverly directed by Julius Green to present a real circus but made for theatre.

Circus Berserk has ambitions to become a great British Theatre Circus show. And the Edinburgh Festival Fringe is an obvious showcase for our work. Circus Berserk was a huge success in Edinburgh Festival Fringe in 2018 and we return in 2019 with a modified and better show looking for International bookings to take Cirque Berserk Beyond the United Kingdom.

The Edinburgh Festival fringe offers Cirque Berserk the opportunity to showcase our thrilling production to the world in a way that no other festival can.

I trained with mime artist Jonathan Kay. I was a truly hopeless mine! However, Jonathan Kay gave me the opportunity to experiment as a talking clown, busking on Brighton beach with Attic Theatre for many summers during the early 1970s. Then veteran acrobat Johnny Hutch took me under his wing and trained me as an acrobatic comic, eventually persuading me to found my own circus in the 1980s.

I trained as a drama teacher, and I suppose if I had not had the opportunities to perform on stages and in circuses throughout the world, by now I will be looking forward to my retirement from the teaching profession.

Without doubt, I already have the best job in the world. I’m lucky enough to work in countries worldwide, with wonderful men and women from throughout the world, and produce shows which entertain families worldwide. As someone else once said, performing in the circuses living the rest is just waiting.

Watching Coco the clown at Billy Smarts Circus in Oxford.

All performances need to inform social commentary and be relevant to contemporary audiences. That’s what makes live theatre so important! But in the case of this circus company, with its base in traditional circus, we celebrate our own Intangible Cultural Heritage.

The circus as an industry is constantly evolving. Even the circus changes with advances in technology although the of the circus heart remains the same. Human bodies are stretched to the limits of human endurance to present entertainments which makes audiences grasping disbelief at the human ability. Don’t believe me? Come and see for yourself!

I love my work.

Free Fringe performers often celebrate the immediacy and intimacy of their performance. But theatre producers and directors take the opportunity to control the performance on a set stage. Cirque Berserk loves the NICC, If the audience were any closer they would be sitting on the motorbikes with the riders!

Wait until your show is absolutely ready. Preparation is everything to create a truly memorable show. Entertainment is the name of the game.

With the Pleasance at the EICC twice daily throughout the Festival.

Cirque Berserk! will be at the EICC as part of the Pleasance programme for the month of August for tickets go to www.edfringe.com 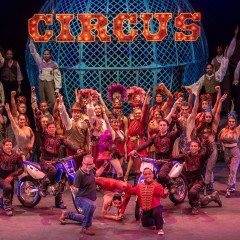 Interview with Martin Burton founder and director of Zippos Circus