"If you’re doing a 20 minute serious bit about Brexit with no laughs, you’re probably in the wrong game IMHO"

I am Chris Washington, a stand up comedian from Wigan, I have 3 GCSE’s A*-C and I was a postman for 10 years.

I like my shows to feel like a mate telling you funny stories in the pub. I’m not here to tackle any issues, challenge your thinking or provide any kind of hard hitting message. Just switch off for an hour, have a pint and a laugh.

Mainly because doing the intensity of doing so many shows over a month makes you a better comedian, you can really hone your material. As well as gaining new fans and being part of the world’s biggest arts festival.

I think I already have the best job in the world, but I wouldn’t mind being a waterslide tester.

I remember my mum cutting up an ice ring donut for me before nursery, I scoffed it whilst watching the news and remember thinking the guy on the news had a head shaped like a biscuit.

No. I didn’t start comedy to respond to events or give social commentary. I started comedy to share funny stories/ thoughts with people and have a laugh. I think we all have to remember that if we’re calling ourselves comedians then funny should come first. If you’re doing a 20 minute serious bit about Brexit with no laughs, you’re probably in the wrong game IMHO.

I don’t even understand that question. I had a story about biscuits in my show last year, and this year I have one about Emmerdale. What does public sentiment mean?

It’s whatever works best for you. It’s easier to get bums on seats if it’s free to get in but there’s always tight b*stards who will chuck in 2p on the way out. Ticketed venues often have more staff and ushers to help the show run smoothly. I don’t really know, as long as you’re up at the festival doing a show it doesn’t really matter.

Be funny, do what you want to do, don’t scrap what you do the rest of the year to try and fit an agenda.

I live in Golborne and drink in The Millstone pub quite a lot, so you can probably find me there. My twitter/ Insta is @chriswash_ too. 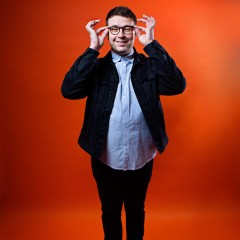 "If you’re doing a 20 minute serious bit about Brexit with no laughs, you’re probably in the wrong game IMHO"