Hi! My name is Dan Soder, I’m an American comedian who is sometimes on a show called Billions and I have Sirius/XM radio show called The Bonfire with Big Jay Oakerson. I’m tall, enjoy sleeping in and I love rainy weather, so I’m looking forward to Edinburgh in August.

It’s about being the son of a deadbeat father and wondering if that means I shouldn’t have children to avoid similar mistakes.

It’s a historical festival with thousands of incredible performers and something I’ve always really wanted to do. I’m filming a special in October in the States and this is the perfect way to get ready for that taping.

Other festivals aren’t as historic and also don’t allow the performer to do as much performing as the Fringe does.

Watching comics like Dave Chappelle, Patton Oswalt, Maria Bamford and Bill Burr always made me want to be a great comedian.

I honestly would probably have a job where I had to do small amounts of actual work and then just got to sit and hang out with coworkers. (I was always a pretty terrible employee when I had a job that sucked.)

I would love to run those machines that crush cars into cubes. Cause, why not? It looks like so much fun!

Watching Mel Brooks movies with my Dad and he told me that you could be funny for a living. It blew my mind.

I don’t feel smart enough to tell people how to think. That being said, if something crazy happens in society, being a comedian might be the best job, because you just get to make fun of it.

A lot of airports.

Mel Brooks, I just think his level of satire is so funny and clever. He’s the best.

I don’t really know since this is my first Fringe. I just hope people come out to see the show and enjoy it.

Make sure you have a roommate that you’ll enjoy spending a lot of time with. (Hi Sean Patton!)

I’ll be in the Dairy Room at the Underbelly, at 7:15pm every night.

Dan Soder’s debut Edinburgh comedy show ‘Son of A Gary’ will be at the Underbelly Dairy Room at 7.15pm from 31st July – 25th August. For tickets go to www.edfringe.com 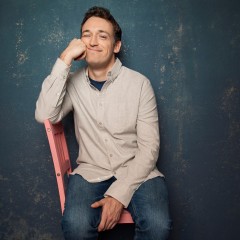