Black history has to be prised out of the white narrative mainly concentrating on slaves instead of seeking to create a rounded view.

Hi all, my name is Njambi McGrath.

My show is called accidental coconut, because I discovered that ‘coconut’ is not just a tropical fruit but a racial slur. This got me on a journey which was triggered by the death of my father during which I began to explore the notion that an African/black person can never be truly of an independent mind when our way of life brutally curtailed with slavery and colonialism during which our narrative was hijacked. All African history is narrated from the white perspective, and it often ranges demeaning, pathetic, derogatory to downright racist. Our education systems were replaced by the European education paying little acknowledgment to the indigenous knowledge, history or civilisation. The term coconut tells the story as if Africans/black people chose to see the world from a white perspective ignoring the fact that this juncture was achieved through slavery and colonialism, and whatever roots black people retain is by sheer determination and still through the prism of whitewashed world.

My show argues that the narrative always glorifies the hunter until the lion learns how to write and I am not saying I am the lion, but it is the start. Black history has to be prised out of the white narrative mainly concentrating on slaves instead of seeking to create a rounded view which I guess is difficult to fit it all in the one month that is awarded to black history.

I love performing at the Edinburgh Fringe because it’s the biggest showcase in the world. You get agents, touts, artists, comedians all congregated in one small place in Scotland, all that ego is like a nuclear fusion.

It’s world famous and being based in London makes it an ideal place for me to reach the rest of the world in a train ride.

Getting into comedy was actually suggested to me by my clients, as my day job is teaching. My earliest inspiration was when I first listened to Eddie Murphy and Richard Prior when I was growing in Kenya on a cassette player because everyone spoke about them, but I struggled to understand their accent. I nonetheless grasped the notion that people could say funny things for entertainment.

Performing in arenas by night and writing books by day.

The concept of art is very different for me as I grew up in Africa. There were barely any art galleries but the art we are exposed to in Africa is through every day things like gourds, cooking pots, jewellery and printed fabric so in that respect it’s as far back as I can remember.

As a comedian I am very aware that one has to keep writing fresh material and as world events change and once funny jokes or parodies become very stale very quickly.

Yes, people are more aware of others plight and suffering and punching down is never acceptable. This is a very positive thing that makes us work harder and not pick on easy targets.

I would like to work with George Carlin because he understood how governments work, the notion of ‘freedom and democracy’ so well, and since I am a political comedian, I think we would have a blast.

Ticketed shows work well for people who are already famous. If you are unknown, few people are willing to take that risk. The free model is brilliant for unknowns because it allows people who are curious and impulsive to sample what you do and that way you can develop a fan base. If they like what you do, they will be the people buying tickets to your shows in the future. Also, people are happy and will readily give a contribution, sometimes even more than they would have been willing to pay in advance once they have sampled what you do. Obviously when you are famous selling tickets lets one monitor demand and have a guaranteed safety net.

Work very hard to get a great show, and sure take your goods to market and who know who might be browsing.

Njambi McGrath’s new stand up show ‘Accidental Coconut’ will be at the Just The Tonic Marlin’s Wynd for the month of August for tickets go to www.edfringe.com 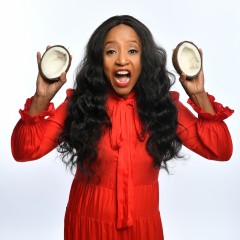 Black history has to be prised out of the white narrative mainly concentrating on slaves instead of seeking to create a rounded view. 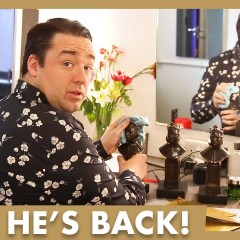