As he enters his tenth year at Edinburgh Festival Fringe, Mr Twonkey talks to Voice about his show, his inspirations, the Fringe, and architect Joseph Van Neck.

It’s a show that uses puppets, props and songs to tell far out stories. I have set pieces, which follow a path towards an unusual goal. I play with surprise and run amok with a sideshow of freakish merriment.

I’m been performing here for ten years. It’s a great place for more ‘out there’ acts to find a home. You can do things at the fringe that only truly make sense in the fringe bubble, there’s northing else like it on earth.

It’s bigger and its in Edinburgh I guess. It was the first of its kind which gives it a certain mood and a vibe which feels classic.

Ivor Cutler the Scottish poet, songwriter and humorist I felt I could do a show with his kind sprit to it. Something that takes you to a different world and opens your head up and pops things in there for the better I hope.

I’m a tour guide to pay the rent but I would love to perform full time and take this crazy shit around the world. I’ve heard you can do that if you are really lucky.

Really high up in advertising I’d like to be the guy that drops a milkshake the size of Singapore into the pacific ocean I would clean it up afterwards.

The ghost of my grandfarther making a cottage with shells in the garden, he had no legs. Then I ran back into the garden as someone smashed a beach ball in my face. It was a red-hot summer day in Middlesborough.

Never, that’s not my bag. I'm a fantasy act. However sometimes it creeps in the back door. I drop down a carrot or two if I feel it pulling that way. Wink wink!

Not really I don’t set out to hurt people but sometimes you slip up and say something in the moment, which could be taken the wrong way. You just have to deal with it in a fair and hopefully funny way.

I would like to be taken back to the Brussels International Exposition of 1935 with Belgian architect Joseph Van Neck. I would like to watch over the building of the various pavilions and then visit the fair on the day of its grand opening.

The free fringe costs less to do as the venue fees are low but some people are a bit snooty about it. It costs more money to do a paid show as you have to pay high venue fees but it can work out well if people buy tickets and a buzz builds around your show. Both ways have their pros and cons.

Make sure you have a show that’s ready to be reviewed. Don’t come up with no ideas and nowhere to stay. You know, plan it a bit and work really hard.

Twonkey’s 10 Year Twitch will be at the Just The Tonic Caves Wee One at 410pm from 1st – 25th August for tickets go to www.edfringe.com 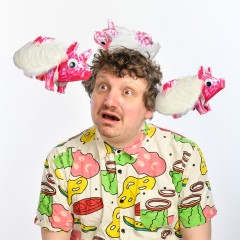 As he enters his tenth year at Edinburgh Festival Fringe, Mr Twonkey talks to Voice about his show, his inspirations, the Fringe, and architect Joseph Van Neck.