Romanian actor, writer, director and poet talks us through her award winning show and offers some sage advice to those who want to follow in her footsteps

Hello, everyone! My name is Ioana Goga and I am an actor, writer, director and poet originally from Romania. When I was 10, I decided I wanted to be an actor, and that was that, everything I have done since has been with the purpose of getting me closer to that goal. My parents weren’t very pleased about it, initially, but I am pretty relentless when I set my heart on something so they “surrendered” in the end. I moved to London in 2014 to pursue acting training and a career in the performing arts industry. Since then I have co-founded a theatre company  (Eye Opening Theatre), co-produced a London tour of the company’s first original play, written my first play (Love (to) Bits), graduated from the University of West London’s BA Acting for Stage and Media course and started writing and performing poetry consistently at events all over London, and even a couple in other cities.

Give us the typical outline of a day?

It depends if I am working on a show at that time, or not. If I am, then I will get up at 7 am to be at rehearsals at 9 am, rehearse until around 5-6pm, then get home at around 7 pm. After that I’ll either relax for the rest of the evening so I have time to recharge, or do some producing work for the show (scheduling emails for the next day, social media marketing, inviting industry people to performances, etc), depending on how tight a schedule I am on. If I am not working on a show, then I get up later, I really love sleeping in, and I search and apply to opportunities online, anything that I like the sound of related to performing, writing or directing. After that I go watch a show, or attend an event, write some new content. On the days I am not very productive I watch TV series, or play on my Xbox and I try to teach myself that’s fine to rest, particularly as a freelancer, as it can be quite difficult to strike the right work-life balance.

Getting to express myself freely and feeling like I am helping, in however small a way, to making the world a better place, contributing something to society. I genuinely believe art, under whatever form it may be, is vital to humanity and our ability to empathise with others and that’s invaluable.

I really struggle with how uncertain everything is and how difficult it is to break into the industry and make your voice heard, particularly if you’re from an underrepresented social category (BAME, working class, people with disabilities, etc) . You may have a truly great project, but it’s really hard to actually put it out there, gain access to a large platform and get it to be seen by people, which is the main goal - to share it with others.

Winning the Brighton Fringe B. Fest Award as part of the International Youth Arts Festival last year, out of 50 shows, I never expected that to happen and I felt so honoured and relieved, I finally had a confirmation that my work really is good and people connect to it.  Getting one of my poems published in an anthology - Love Like Salt. Also, directing a show at the Southwark Playhouse in London as part of a fundraiser night in aid of Shelter, because it’s a cause I care deeply about and the event did really well, it was sold out.

I think the biggest challenge is actually getting to support myself solely from my creative work. Unfortunately, I haven’t managed to overcome it, but I do think I am on the right track. I think the only thing that can be done is applying to as many opportunities as possible, doing as much work as you can, because that’s how you build relationships with people and the experience you need to advance, and learning about what programmes or schemes to help emerging creatives are out there.

What was your career path into this job?

I was part of various amateur theatre groups while in high school in Romania to gain experience and keep myself involved in acting, then I auditioned for drama schools in 2014. I did a foundation course at Arts Educational Schools London, then a BA Acting for Stage and Media Course at the University of West London, and that’s where I found the people I co-founded my theatre company with. We created our first show together in 2015 - The Olympians - we produced a London tour for it last year. By that time I had already written my play as my dissertation project, and now we’re looking to also produce a London run for it. Everything else I’ve done has just come from being part of websites, casting services and Facebook groups for actors/writers/directors and finding out about opportunities that way. 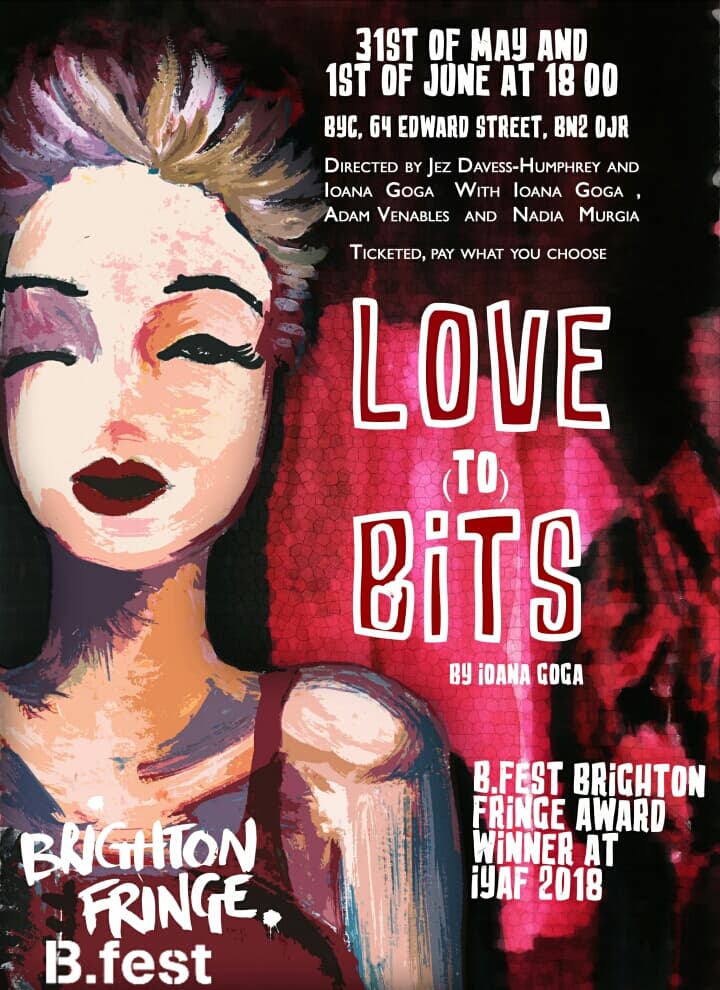 You’re bringing your show, Love (to) Bits, to both Brighton and B.Fest for the first time. What has that process been like?

It’s been a very good learning experience and a bit overwhelming, at times. It’s the first time I am taking a show outside of London, so I had to go back and forth between the two cities and make sure I am promoting it enough and that everything else is in order, which is a bit hard to do when I don’t live in Brighton. I have received a lot of support from the people at the Brighton Youth Centre (who are in charge of B.Fest) who also acted as the link between me and the Brighton Fringe, and my colleagues from the theatre company, so being part of two festivals at the same time wasn’t as crazy as it could have been.

Can you tell us about the show?

Sure. Love (to) Bits is a comedy-drama that incorporates verbatim theatre, media projections and multi-rolling and is divided into two story arcs. The main one follows the romantic life of Cynthia, the main character of the play, from the age of 4 - when she had her first love - right up until the present day. The secondary one is comprised of various people’s answer to the question “what is love?” and it serves as the transition between the scenes in the main story arc. One actor, Nadia Murgia, play all the verbatim characters, and Adam Venables plays Cynthia’s main love interest - Van.

What was the creation process like for Love (to) Bits?

Love has always been a subject that has fascinated me, I’ve been a hopeless romantic for as long as I can remember so when I decided to write a play, it only made sense to write one about something that has been such an important part of my life. As tragedy plus time equals comedy, all the heartbreaks I had acquired over time became really funny, so I thought I might as well put them to good use and draw inspiration from them for the play.

Still, I didn’t want it to be a uni-dimensional world, all focus on one character and her experiences with romantic love. I wanted to talk about love as the complex, multifaceted feeling that it is, so that’s where verbatim theatre came in, exploring and portraying various people’s notions of what love is so that the play is more universal. The rest kind of just came naturally, I wrote the first half of the play in one sitting, half a day. The second half took me three more months to write because I just couldn’t bring myself to do it, it was about a particularly painful personal romantic experience and I didn’t feel ready to relieve it in order to use it for the play, but when I did, it was over in another half a day. I cried and wrote and cried and wrote, but then it was done. I think it’s vital to be mindful of your feelings when using personal experiences for a creative process, our acting teachers always said: “Use scars, not wounds.” That’s a very useful advice.

Continue being as relentless as you are, but learn how to also be patient and kind to yourself, because you will need all of those things more than you can imagine on the road you’ve chosen. Also, if you do life right and work on yourself, I promise it gets better as you get older.

I think the most important thing is to be 100% sure that they can’t live without it and that they are really good at it, because when you are faced with mountains of rejection, constant uncertainty and a really tough industry, those two things are the only ones that can keep you going. Also, try to build a strong support network for yourself for those moments when your certainty falters, it’s ok to sometimes doubt the things I mentioned, if you have someone there to fully believe them for you.

And where can people find out more about you and your theatre company?

Watch the trailer for Love (to) Bits: 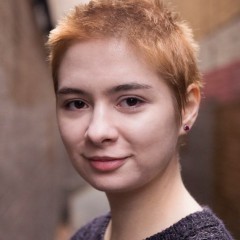 Romanian actor, writer, director and poet talks us through her award winning show and offers some sage advice to those who want to follow in her footsteps