"Being at MIF has taught me how important it is to see something through and not compromise, because that’s what sets people apart."

I’m Michael and I’m one of the trainees at Manchester International Festival.

And what is your role within the Creative Traineeship Programme?

I’m working in the Ticketing Department which means helping to set up everything that happens before someone can buy their tickets.

My day involves a lot of customer interaction – emails, calls and using the web chat. But every day presents something different, last week some of us stayed in the office after work to play a game called ‘Playing Up’ where we recreate live art, which sounds very sophisticated, but we were mainly messing with cornflour and playing dress up - so a typical day isn’t that typical.

You get to have some really unique experiences and meet loads of people around the city who are working in creative industries or bringing creativity into their work. Free tickets to shows isn’t bad either.

And what is something you find difficult or challenging?

Something that’s been difficult has been getting used to the pace of a creative 9 to 5 because people take their work home with them a lot, either literally or just the idea of always looking for opportunities and staying observant/creative.

How did you first get onto the programme?

I got onto the programme after applying for an open day. Here we discussed what ideas we’d bring to MIF and the Factory. I actually only found out about it the day before and I was in a different city at the time but I managed to make it. From there a few of us went on to the Creative Training Academy a few days later.

Why did you apply for the Creative Training Academy?

I applied for the Creative Training Academy because it seemed like an opportunity I couldn’t miss. It’s not very often that you get organisations on this scale doing an open call to people who haven’t previously worked in a creative industry or studied it to some level.

What has been a highlight of your experience?

I think a highlight has been shooting an interview for The Factory Academy, it was really cool to be a part of the story of a place that’s gonna have a big impact on the city and the people in it.

How have these opportunities helped you develop?

It’s helped me establish what I want from a career in the arts and what I don’t, what type of organization I want to be a part of and a better understanding of my skills and knowledge in this world. It’s helped me be more confident in my ideas inside and outside of work because I can see they’re being considered.

Do you now feel more confident in pursuing a career in your chosen field?

I definitely feel more confident pursuing a more creative career, being at MIF has taught me how important it is to see something through and not compromise, because that’s what sets people apart.

Do you believe that opportunities like this are helpful for young people looking to get into a creative career or organisation?

I think this opportunity and opportunities like these are really helpful for young people who are making a start in this industry because there can be a lack of transparency in some creative industries, and a lot of the industry talk can feel impenetrable so it’s good because giving these opportunities says they’re willing to open up the organisation and widen it.

Was a creative career something you had considered before taking part in the Creative Training Academy?

I had considered it and was pursuing it but never had any experience beforehand, which was making it difficult to get anywhere with it. But, I feel like after this I can go in any direction - whether it’s doing something more creative myself or increasing engagement and participation in the industry.

Talk to people you normally never would.

Say yes to a lot of things, but don’t be afraid to say no.

In your opinion, what is ‘unmissable’ about MIF19?

Basically everything. But in terms of shows? I would say I’m definitely going to DYSTOPIA987, Studio Creole, Alphabus, Tree, Parliament of Ghosts and Janelle Monáe. I’m really interested in Maggie The Cat as well as Invisible Cities and Tuesday too. So yeah - basically everything.

We are releasing interviews from all seven MIF Creative Trainees throughout May. To read the others, click here. 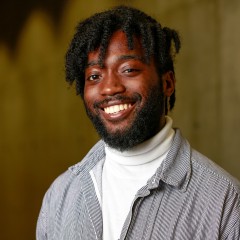 "Being at MIF has taught me how important it is to see something through and not compromise, because that’s what sets people apart."