20 year old playwright and actor Brandon-Robinson Connolly sat down to give me an insight into the current development process of his newest play ‘Leo Rising’.

Tackling themes of society, faith and religion, Connolly describes his play as ’a modern day tale of survival, love, but most of all, hope’. Connolly first began developing the play as part of the National Theatre’s ‘New Views’, a playwriting competition for young people across the UK. Since then, he has taken the play to fantastic new lengths as he progresses to work with a full team of creatives from his hometown of Leeds.

“Almost three years ago I started writing my first play and through gaining confidence in myself, with the support of friends, venues and artists, I am excited to be finally able to talk about the future of my first play - Leo Rising. DH Lawrence described his first play ‘The Daughter-in-Law’ as ‘neither a tragedy nor a comedy - just ordinary’ and that is exactly how I’d proudly summarise Leo Rising”.

Currently part of the Leeds Actors in Training scheme and a Young Leader at the Leeds Playhouse, Connolly furthers his career by delivering workshops and events, enabling him to begin setting himself up as an artist whilst completing a prestigious Gold Arts Award. “I always aspire to try new things as I believe that will help me grow as a performer and an artist. As an actor, I find telling stories is part of my DNA, it’s what excites me and is something I gain a great amount of joy from. I have at times felt pressured into being a person and performer that I don’t feel represents me. We should be allowed to be ourselves, with a willingness to learn and grow with the help of others.” His hard work and dedication has helped him secure a place with the National Youth Theatre, where he begins training this summer.

Where did you find the inspiration for ‘Leo Rising’?
Leo Rising was an idea I originally had through the National Theatre Youth Project ‘New Views’. The inspiration came from a mentor on the project telling me to present something I wouldn’t expect to see on stage. I started to see two brothers on a roof. From this anything was possible, this was my way in.

When I sent this 20 page play off to New Views, I knew the story wasn’t completed. I’ve taken a great deal of time to expand the play and after a course of development with a number of workshops, I approached Olivia Dobney to direct in the room. I felt she understood my ambitions and would help push any reservations I had about the elements in my head onto the floor, along with the help of a talented bunch of actors who very kindly gave their time to help my characters materialise from the page into the rehearsal space.

How was the main character (Leo) born?
There is an element of myself in all of my characters. I find writers can’t help but use what surrounds them as inspiration. I’ve really focused on creating three rounded people that are different to each other. It's important to say they all have there peaks and troughs. No one is perfect and we all hide things from each other.

How did you find the process of writing a play for the first time?
Writing has been a very personal experience. I wanted to do this in the most respectful way possible, a number of people have taken part in the research, so this is represented as truthfully and respectfully as possible to all the communities that are mentioned within Leo Rising. It’s been a rewarding experience gaining feedback and using this to push the play’s message forwards.

What have you found most challenging throughout the process so far?
It has taken a great amount of time to get to the point of being ready to apply to the Arts Council for a rehearsal and development period. This would be a paid opportunity for Director Olivia Dobney along with myself to experiment and trial ideas regarding staging my play with a group of actors and creatives.

While presenting the application we must have 10% of the overall budget from a secondary source and our challenge has been obtaining this. Obstacles have got in the way and we have had to find new routes to overcome these issues. Support from venues (such as Cast in Doncaster) has come in kindness and whose trust and belief in Leo Rising from day one was shown in their support to help us when we needed it most. This is priceless for us and will be of great help to the application, the challenge has always been to find the money.

What has been most rewarding?
This is my first play which means I have nothing to compare it to. Every moment has been a chance to discover something new. To be asked by Olivia to join the acting company of my own play was a very special but scary moment for me, To have a group of actors say your lines and have a team of influential artists come on board has been a great privilege.

How to do you want young people to feel after watching your play?
It has already excited the young people I have spent time in the room with over the past few months and it was then I realised what I was writing wasn’t just speaking to me as a writer, but to young people who normally don’t feel reflected in theatre. I want young people to find their own voice through this. Through the workshops, I’ve learnt that some young people feel labelled and don’t want to be. Labels shouldn’t matter. We should all respect each other equally. I think showing characters on stage that have very different opinions, that represents the current climate and range of communities will fuel a conversation for everybody, but especially young people.

What are your goals for the future?
Personally, my goal is to continue growing my confidence. Now it’s about daring to aspire to be what I have previously feared. I have learnt that when you put the hard work in, anything is achievable.

The play has a more specific goal, in the coming days we will be launching our ‘go fund me’ campaign. The play’s following is slowly gaining momentum through our new social media accounts and relationships formed through feedback groups. These experiences and a willingness from people has shown a clear support for the play and how important it is to an audience of people wanting to see new theatre from emerging artists.

Do you have any advice for those wanting to branch out into playwriting?
Write something you are genuinely excited by. Use your own voice and be proud of it.
It’s so important to pay attention to all the feedback you get and be willing to ‘kill your darlings’ as it were. However, you should also stand your ground when you believe in something you’ve written.

With reviews such as “I think it’s brilliant, I’m so excited ! I think it’s a brilliant balance of humour and a hard hitting story. I think some elements are incredibly simple but evocative. I am so interested in the relationships, I think they are so complex in a really cool way”. Leo Rising is definitely one to watch. 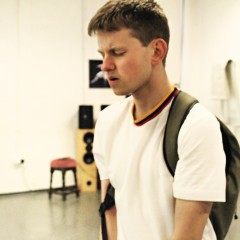 20 year old playwright and actor Brandon-Robinson Connolly sat down to give me an insight into the current development process of his newest play ‘Leo Rising’.

The talk of Karate with a special Guest speaker