Voice MagInterviewsWe’re the leaders of…

“We are doing this to feed the homeless, not to feed egos.”

Kalila Smith, a 16 year old from North West London, organised a 40-volunteer strong homeless drive around Euston in central London this October. I was thrilled to be one of the volunteers, and having already reflected on this experience myself, I turned to Kalila for her own thoughts on the process, successes and impacts of the drive. She has been philanthropically driven ever since I met her five years ago in Year 7, and has since turned her passion into progress. She organised the homeless drive in conjunction with the Youth Project, a charity which focuses on using teenagers as volunteers. We collected donations at UCL before splitting into groups to distribute these resources, stopping to talk to every homeless person we passed on the London streets.

I questioned how this experience altered her perspective on homelessness and whether it has changed her actions since.

What made you decide to organise a homeless drive?

Last summer, I went on a trip to Ghana, and it was a truly enlightening experience for me. The conditions I saw there were awful. I was seeing kids on the streets; kids running around with no shoes on their feet. There were truly horrific conditions and yet it was a beautiful country with beautiful people in it. And that really motivated me; I suddenly had an irrepressible urge to do more philanthropic work. It made me realise how lucky I was to have everything I have. The homeless drive was a way to acknowledge those people who don’t have as much - even if just for an evening. I think it’s such a great way to help other people. At the end of the day, we are responsible for each other. We can’t just lead individual lives - we need to help each other.

What was your biggest challenge when organising it?

My main job was galvanising helpers. I worried beforehand that people weren’t going to help out and weren’t going to be collaborative, but luckily, when I got there, everyone was phenomenal. Everyone was there for the same reason - simply to help people. I was so grateful to the volunteers because they were all extremely motivated. There actually weren’t too many hurdles because, in all honesty, a homeless drive is a very simple initiative. All you need to do is to walk around the streets and hand out resources!

However, I suppose one of my fears was safety. Ultimately, I was encouraging 16-year-olds to go out onto the streets and to possibly interact with intoxicated people. I was rather worried for their safety and did feel responsible for them. But everyone was very capable and dealt with each encounter maturely.

Why do you think people volunteered? Might some people have had ulterior motives rather than an actual desire to help others?

It may be rather cynical, but it is true - people aren’t always motivated by kindness. That is the way we work as a species. That is the way the world goes round. There are people who are doing philanthropic work just to get it on their CV! But ultimately, I believe that as long as people are doing it, as long as they are helping out, as long as they are aiding homeless people, then that’s what matters most. We are doing this to feed the homeless, not to feed egos. As long as the volunteers are helping people on the streets and giving them a positive experience when they interact with them, I don’t care too much about their own motives. What’s important is how the homeless people themselves benefit.

Why do you think people don’t often act on their desires to help others?

Often I feel their desires just aren’t strong enough. People simply don’t care about the current status of the world. Personally, in my opinion, if people are affected by what they see on the streets, by what they see around them, by what’s going on globally, then they’d want to get involved. They’d want to volunteer - whether it be in a charity shop or going abroad to explore a country that’s less economically developed. And we do have those opportunities. It’s hard for me to believe, especially at my school, that people don’t help others simply because of a “lack” of opportunities. But I understand why, at schools where they don’t offer or encourage volunteering, students feel that there aren’t any ways to help out. And then I think that’s an issue with the education system and the lack of importance they place on encouraging young people to get involved in the world around them.

Do you think it is more important to encourage young people to volunteer than any other age group?

I think volunteering is important for our generation especially. We are the ones who are going to be leaders of the future; we are the ones who are going to be taking the reins soon enough. And if we aren’t exposed to the harsh reality of the world, it’s going to make us ignorant when we’re older. If we are encouraged to volunteer, or even just to do one kind act a day, then that should open our eyes. Volunteering increases your empathy. It makes you see less things in black and white; it helps you see more grey areas - which I think is an important mindset to have in life.

It’s also about improving yourself. Young people naturally have very low self-esteem because we’re trying to figure out who we are – and we’re often very confused. Helping others, from my personal experience, really gives you a sense of self-worth. And that’s what’s so important about volunteering, especially for young people. It’s about having that experience now which will set you up for later in life. I think that if you take that stepping stone now, you’re much more likely to do it later on. If you do it now, it will just become a natural thing to do.

Has this changed your perception of homeless people you have since passed on the street?

It most definitely has. For example, on Christmas Eve, I was with my mum and my sister, and there was a great atmosphere in central London. The lights, the people - it was all so beautiful. We were in the car and I remember looking down and seeing five people on the streets. Five people - just lying there. And it felt so surreal. It just didn’t seem right. I was with all these jolly, exuberant people celebrating their Christmas Eve, walking past the shops, walking past the designer brands, all with their families, and they were probably heading home for the countdown to Christmas. Then I saw these people on the streets, in a blanket in the freezing cold. And I told my mum to stop the car. I said, “We need to get them coffee. We need to get them food. This isn’t ok”. We went and spoke to them and asked, “How are things?” And in the end they didn’t want any food. And that was fine. But I just remember saying to my mum, “This isn’t ok”. And I would never have done that were it not for the homeless drive. It completely changed my perspective. I no longer just walk past, nose in the air, pretending that homelessness doesn’t exist. But I think that is what a lot of people do today. They walk past because they don’t want to face the harsh truth that while you have money in your pocket, there are people on the streets beside you who don’t have a penny to their name. 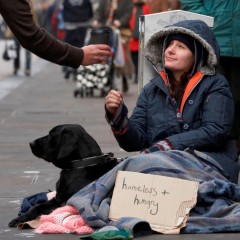 We’re the leaders of the future: The 16 year old homeless drive organiser

“We are doing this to feed the homeless, not to feed egos.”