Freelance filmmaker and digital facilitator Kitty Wallace talks us through her latest projects, heritage films and how to make a living behind the lens.

Hi, my name is Kitty Wallace and I work freelance as Film and Digital Facilitator for Carousel, [an award-winning charity which supports learning-disabled people to achieve their artistic ambitions through workshops and projects].

We organised a launch event of the final films at The Attenborough Centre for Creative Arts in Brighton where we screened the four short films made by the young people and the four heritage films with a soundtrack played live by Carousel’s House Band of learning-disabled musicians. We also celebrated our Arts Award achievers with students from the participating schools receiving their certificates.

Currently, I am working to recruit and manage a team of young people to join the Oska Bright Film Festival team. We’ll be holding a young people’s day at the Festival in October 2019 and delivering arts award to the team and other young people that we’ll work with throughout the year. At the last festival, in 2017, over 70 young people gained their Discover Awards and we hope to beat that in 2019.

I love the Carousel team and being involved in such a great charity that supports people with learning disabilities to reach their full artistic potential.

I am a freelance filmmaker working with various community groups making short films and I also run ‘challenging gender stereotypes’ workshops in schools. I have taught media to people 16+ and I am an Arts Award adviser in Discover, Explore, Bronze, Silver and Gold for my self-employed work and for Carousel.

Keeping up to date with the technology having had a break when having a family – it’s good to kept up to speed with new technology.

It’s been harder to get funding in the arts.

Believe in yourself and you can do it, follow your dream and don’t be discouraged if anyone tells you can’t do it! Work hard and keep on doing what you want to do.

Find an organisation you want to work with and ask to volunteer with them, to see how it works and learn more creative skills. Get a good show reel together. 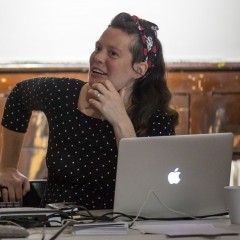 Want my job? with Kitty Wallace, Film and Digital Facilitator at Carousel

Freelance filmmaker and digital facilitator Kitty Wallace talks us through her latest projects, heritage films and how to make a living behind the lens.