Could you first introduce yourself to the readers?
Hello- should I say ‘readers’ or ‘reader’, because it’s impersonal to say ‘readers’ isn’t it?

It’s entirely up to you
Hello reader. My name is Ed Gamble. I am a stand-up comedian and I’m at the Edinburgh Fringe doing a show called Blizzard.

What’s the show about?
That’s a very broad question.

Briefly!
Briefly…it’s called Blizzard, which relates to a story I tell at the beginning of the show when I got stuck in New York in a snowstorm with three other comedians at the beginning of the year, but from there we take in many different topics and stories. It’s not about any one thing, it’s me trying to make people laugh for 55 minutes to an hour depending on how well I succeed.

How many times have you been to the Fringe?
Well my first Fringe was in 2005, and I took a year off in 2010, but apart from that I’ve been here every year.

Why do you keep coming back?
I like it a lot now because people come and see me, which is very exciting. You do a lot of those early years when no one comes to see you, or the people who do come to see you you’ve had to drag in, so now it feels like reaping the rewards a little bit. But I just enjoy the atmosphere, and it’s nice to have something to work towards. Weirdly, for a comedian, I enjoy having a schedule and I like being told what to do and when. I like having a bedtime! So, someone telling me you need to have a show ready by August is good for me, because then I work towards that deadline.

Is Fringe different to other types of performing?
Yeah, it’s a bit of a marathon. I’m doing the show 28 times while I’m here, which is a lot. You speak to American comedians who can't believe it - when American comics come over here it blows their minds that people are doing the same show every day for so long. Just before I came to Edinburgh I did Montreal Arts Festival, and it’s such a different atmosphere. It’s mainly mixed bill shows so I was just running around doing a couple of ten minute slots every day for five days, and that was it. People were saying it was such a tiring festival and I was like you have no idea mate!

What’s it like doing it so many times?
Well, the nature of what I do is I try and keep it fairly loose anyway so I can surprise myself and chuck something new in, and I’m very easily distracted so I’ll dip in and out of what’s happening in the audience as well. All of the jokes are the same, but whatever happens around those jokes will be different every day because I’m not a theatrical performer, so there’s no set movement or anything. I keep it fresh for myself every day and I think the audience appreciates that. Especially in stand-up - you want to see there's a bit of light behind the eyes! And it’s a live experience; it’s meant to be exciting, not robotic or just going through the motions.

Have you always wanted to be a comedian?
I wanted to be an actor when I was younger - that was my dream job, and I do a bit of it now and again - but then I saw the Cambridge Footlights performing when I was 17, and I couldn’t believe there were people who were close to my age who were doing this and were amazing. In my head I was like well these people are nearly my age and they can do it so I can do it! And the next day I applied to Cambridge University and did not get in, because apparently they don't take kindly to people who apply just to do footlights and have no knowledge about their chosen course.

What did you apply for?
Philosophy. It’s a big course. I did it at Durham University instead, which is as posh but with a quarter of the workload.

So…winning?
Exactly. And I ended up doing sketch comedy a lot.

So do you prefer performing with others?
No, I don't think I prefer either one. The idea of writing a show alone and then doing that show and honing it and it going well; there's a certain amount of pride in that that you can't get from a collaborative process.

You’ve done Mock the Week - is TV different to live stand up?
Yes it is different because the audience are there and enjoying it but you’re not playing to them. Certainly the seat I sit in I’m side on to the audience and they’re there and you’re hoping for them to laugh, but you’re playing to the other comedians and sometimes out to the people at home. Logistically, as well, they’re quite far away in the studio! There’s not that connection you’d get at a live gig. You’re doing as much stuff to get stuff in the edit rather than just chucking whatever you want in. It’s still exciting but it’s a very different experience.

Do you prefer live stand-up then?
Yeah, I think that’s the main reason I do anything is to do live stuff. TV stuff is really fun and it’s always a privilege to be asked to do them, but one of the main upsides is you then sell more tickets for your tour so you can do more live gigs. I think most comedians would probably admit that the reason they do anything is to do live comedy. If they don’t, where’s their soul gone?!

What do you think we can do to make sure it does get to where it should be?
I try and be fairly vocal about it, as far as possible. It’s a tricky one isn’t it, and of course more needs to be done - I try and speak to TV producers about it. There's been a few instances where you can see things going down an old-school path, and you go hang on, let’s have a look at who you want to put on that and rethink things. People are still learning but it’s taking a bloody long time.

Why do you think it’s important to have diversity?
That’s very easy. People who start complaining about diversity are completely missing the point. Diversity is good for everyone, because if you have a diverse line-up on something you broaden the audience immediately as well because people want representation on-screen. If I’m on a panel show with women and people of colour and that means more women and people of colour watch it, that’s more people seeing me! Everyone benefits from it. I don't understand why people wouldn’t want it. I mean, it’s a very selfish angle to take-

But that might be what convinces the very selfish people
Well, indeed. Plus, it’s so boring just seeing people like me. Let’s have some more interesting voices so we can talk about other stuff!

What advice would you give to young people who want to go into comedy?
It’s difficult, because it’s massively changed since I went into it - I think I was in the last generation that could viably get into it and it become a career fairly quickly. There’s boring answers like just gig a lot, but also write as much as possible - that’s key - and realise that it might take a while. Keep enjoying it rather than worrying about the big picture. And don't worry about what other people are doing either, just focus on what you’re doing.

Thanks to Ed for taking the time to do this interview!

Ed Gamble: Blizzard is on at 19:40 at Pleasance Courtyard until August 26th and 18:00 on the 18th and 25th. For more information and to purchase tickets, visit the EdFringe website. 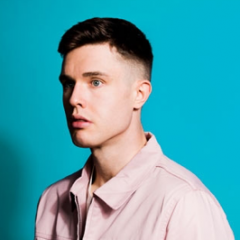