We catch up with Nicki Carter from BP or Not BP about using theatre for activism and how they feel about BP sponsoring the Royal Shakespeare Company.

What’s your background in and how did you find yourself as part of BP or Not BP?

I work in social care as my day job, but I am involved in a few activist groups around London in my spare time. Before moving to London I had seen some videos of BP or not BP actions online and knew it was something I wanted to get involved in. As somebody who loves theatre and the arts, in general, it angers me that our cultural institutions are being used by the likes of BP to give hugely destructive corporations the appearance of being 'socially responsible' at little benefit to the institutions themselves and at a huge cost to the planet and affected groups across the world.

I really enjoy being a part of BP or not BP because of the positive and creative nature of the actions. As somebody who is fairly inexperienced as an activist and a performer, I have found BP or not BP to be a really positive and welcoming space. I really enjoyed participating in the 'rebel festival' that we held right outside the doors of the RSC theatre in Stratford in June. I was really struck by the creativity of all the groups and performers who participated and the positive energy that comes from people of all different backgrounds coming together to protest.

Sometimes it can be disheartening going up against corporations that have so much power and put so much money and resources into persuading the public of their legitimacy. It’s not easy for any activist group to break through those powerful narratives, but I was really encouraged by the support that we had from theatergoers at the RSC. Members of the public were enthusiastic about our performances and many shared our outrage at the RSC’s sponsorship deal with BP.

How do you feel about the about BP sponsoring the Royal Shakespeare Company, specifically the discounted tickets for 16 - 25-year-olds?

As somebody in the 16-25 bracket who loves theatre, I feel really angry that this sponsorship deal allows BP to act like an ally of young people whilst simultaneously destroying our planet, endangering our futures and committing atrocities all over the world. This is an extremely convenient deal for BP which benefits their PR far more than it benefits the RSC, who could easily source this (relatively small) amount of funding from somewhere else. BP itself admits that its sponsorship deals have little to do with supporting good causes, and a lot to do with defending the company’s public reputation.

I am wholly behind the idea that cheap theatre tickets should be on offer for young people, as the price of tickets is a definite barrier to many young people who want to engage in theatre.  However, this does not need to come at the cost of endorsing a company like BP. I would urge young people who want access to cheap theatre tickets to check out The Fossil Free Ticket scheme by culture unstained as an alternative! Info about this can be found at cultureunstained.org/fossilfreetix.

How useful is art as a protest tool?

Different kinds of protest can be effective in response to different issues, but I think that using art as a form of protest captures the imagination and allows for something new and exciting to be created in the act of protest. I also find it to be an accessible and interactive form of protest; at our 'rebel festival' members of the public including children and tourists participated in a way they may not have done with a less creative form of protest.

Also, for BP or not BP, using performance as a tool for protest allows us to celebrate theatre and the arts whilst simultaneously rejecting their relationship with big oil.

How important is it for young people to pave the way for this kind of activism?

Companies like BP, and also Shell with its 'Make the Future' campaign put a huge amount of resources into getting young people on their side in order to paint themselves as progressive organisations that are committed to creating a better future. You only have to scratch the surface to realise that this could not be further from the truth. It’s really important that young people refuse to be targeted and used in this way and refuse to be associated with the destructive actions of companies like BP and Shell.

Do you have any advice for other young people interested in creating art projects to protest and raise awareness of an issue?

I would advise any young people who are passionate about changing the way things are to get involved in activism. There are so many groups out there doing amazing and creative things. If there’s not a group that you want to join, definitely try setting one up and reaching out to people in your area, or collaborating with existing groups to do something new. Activism takes many different forms; you don’t need to have experience or a certain skill set to be able to make a difference.

From Voice to Action 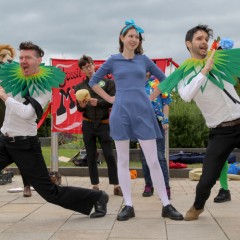 Nicki Carter: Working for BP or Not BP

We catch up with Nicki Carter from BP or Not BP about using theatre for activism and how they feel about BP sponsoring the Royal Shakespeare Company.