Could you first introduce yourself to the readers?
I am Tania Edwards, I’m a stand-up comedian and I have a show at The Mash House every day at the Fringe called ‘Not My Dog’.

What is the show about?
The show is not about dogs. It’s about everything that's happened to me since I last did a show - getting married, having a baby - and it’s a dark take on how life develops. Onstage I’d say pretty much anything that I wouldn't say in real life because I have manners. I think it’s a cathartic thing for people to watch comedy and hear the inner thoughts that they are sometimes good enough to suppress. My stage persona is much more wicked than my real life persona.

When was your last Fringe show?
I was here the week after my wedding (for my honeymoon!) in 2015. But I’d been doing Fringe for years but in all kinds of guises; I’ve done two-handers and mixed-bill shows, and you just keep coming back. It’s a brilliant opportunity to get better at comedy, at whatever level you’re at. Even this show, which I’ve done for a while, I’m adding jokes almost every day just to move things around and keep it interesting for myself, so I’ll leave with a lot more material than I arrived with. That’s the fun of it, because you don't usually get to do a whole hour every day.

How long have you been a comedian?
Ten years now, I think. They say it takes ten years to be an overnight success but I’m trying to buck the trend by taking a little longer. It’s a nice year though, and people seem to really like the show, so I feel very lucky.

How did you get into comedy?
Undiluted jealousy, I’m afraid. Nothing more noble than that. Many years ago, when I was very young, I was on a writers’ programme at the Royal Court Theatre and a guy there ended up going into stand up, and I had a panic and realised I was jealous. I had never been jealous before, so within the month I’d signed myself up to some open mic nights and I’ve been doing it ever since.

Do you still write?
I write plays, and I still write sitcoms and stuff. I write everything. Stand-up is just one element of my writing. Years ago I was working on a novel, and I was in a house share at the time, and I’d read out paragraphs to my house mates and one of them told me I can't expect a clap at the end of every sentence. I realised that's exactly what I wanted, and that's why I do stand up; it’s instant feedback.

Have you always been involved in the arts?
I studied law, but then I did a Masters in text and performance at RADA, and flitted from thing to thing for a while. But I was always acting and writing since I was a child.

Why do you like comedy?
I like the risk. The best thing about live comedy is that things can go wrong, and there's nothing more brilliant than watching something go horribly. Even if it’s you, you know it’s a good story to tell afterwards. And it’s because everyone knows that it could go wrong it’s more exciting and the laughter is bigger.

What advice would you give to young people who want to go into comedy?
There's no room for you, go away! If you want to do stand-up there's lots of open mic nights you can do, so just do it. I mean, a lot of people talk about how they’d like to do it, but just do it. It might be for you, it might not be, but you’ll never know if you don't try it.

Thanks to Tania for taking the time to do this interview! Check out my review of Tania's show here.

Tania Edwards: Not My Dog is on at 15:15 at Just the Tonic at The Mash House until August 26th. For more information and to purchase tickets, visit the EdFringe website. 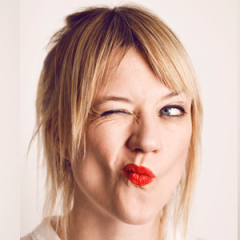