Hal Cruttenden takes some time to talk to Voice about the show, the difficulty in being a social commentator, and  advice to young people.

It’s a stand-up show about me, my family, my weight, my fear of death and my constant attempts to stop ranting politically even though Western Democracy as we know it is dying.

I want to perform here because it’s the best place to start a show that will continue to tour around the UK until March. It’s the same length as the Australian and New Zealand festivals (ie. too bloody long) but it’s bigger… much much bigger. That’s why I’m talking to you to make sure I sell the show!

I was motivated by a desperate desire for acceptance and love due to being emotionally neglected by my parents. That’s crap of course. Parents were fab. I’m just a self-obsessed attention seeker who’s lucky enough to attract a crowd. My inspiration in the 90s had to be Eddie Izzard. I thought if a man that camp and middle class can unapologetically hold a comedy crowd and entertain them, then maybe I can too.

I do update material to respond to events. I can’t help but be a bit of a social commentator. I try not to let politics dominate but I have no time for those right wingers who claim comedians tend to have left wing opinions to further their career at the liberal BBC. I’m desperate not to be an old liberal as maybe I’d then stand out politically and TV shows would be all over me desperate to hear a new voice. Unfortunately, it’s really hard not to believe that right wing populism is the road to hell. I think if a comic realises how dangerous the world now is yet thinks they might attract scorn for commenting on it, they’re abdicating their responsibility as an artist. God I’m a wanker.

I think there’s more outright fury at different opinions nowadays. I try to couch my political stuff in a ‘it’s just my opinion I’m not trying to convert you’ way. The big Brexit/Leave divide should be handled carefully but I think if you’re relatively well-informed and not preachy, one can say what one wants to say without infuriating those who disagree with you. Leavers aren’t all racists and Remainers aren’t all naïve fools. I just can’t help but comment on it. To ignore a phenomenon like Trump, and to a lesser extent Brexit, make me feel like Sally Bowles singing her sexy songs in the Kit Kat Club while Nazis are beating people up on the streets outside.

Thank god for my wife.

If you’re new make sure you’re really ready. Don’t go until you are. A new comic gets far more latitude from reviewers and the awards people who are delighted to see a new face. Your first show is a chance to really sock it to them. Once you’ve been up there a few times and reviewers know you, you’re more of a target - The Bastards!

Don’t panic if you’re not a star in the first few years. Just keep working. Write and write and write some more. Once you get some attention you’re going to need a lot of material and a lot of stage time under your belt. Forget about friends and socialising – when you’re rich and famous you can buy new ones.

My website halcruttenden.com. I have a Hal Cruttenden facebook page and I’m @halcruttenden on twitter – twitter’s the best place to see me ranting about politics when I’m meant to be working. 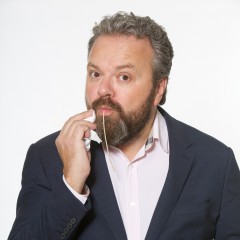 Hal Cruttenden takes some time to talk to Voice about the show, the difficulty in being a social commentator, and  advice to young people.