American comedian Jacqueline Novak talks to Voice about her upcoming Edinburgh Fringe show, 'How Embarrassing for Her'

Could you first introduce yourself to the reader?
I'm Jacqueline Novak, an American comedian and author who lives in New York City. You may have seen my stand-up on The Tonight Show, The Late Late Show with James Corden, or my half hour Comedy Central special. My book, HOW TO WEEP IN PUBLIC: Feeble Offerings on Depression from One Who Knows, is a brother-in-arms guide to depression slash memoir.

Tell us about your show?
It's called How Embarrassing for Her, because I think that sums up my greatest irritation: the idea that someone would say that about a woman. You don't know if she is embarrassed! Maybe you're embarrassed for her, but don't put that on her. The show includes my stand up that's thematically related to what I find embarrassing about myself specifically, the human body, death, sex...even ghosts. But it's all grounded in stories of my adolescence, coming of age as a girl, specifically in terms of sexuality. I try to shed unnecessary embarrassments pushed on us by the world, but then provide a fresh set of things to find embarrassing. The embarrassment machinery in our guts/soul ain't going away, so let's at least freshen up what we're ashamed of. The blow job is a specific issue that I try to...hmm...unpack.

Why do you want to perform at Edinburgh Festival Fringe, and is it different from other festivals?
I've never gotten to go to a month long festival and do 26 long shows in a row. I've never done anything like it. It's such a dream. I went to a performing arts summer camp when I was a kid...and it was really intensive with grueling rehearsals and shows and sometimes I have recurring anxiety dreams about trying to get them to let me in as an adult. It was the best. I kinda feel like this is the closest adult version of that.

What first motivated you to enter the industry? Who were your inspirations?
I loved performing and writing...and put those together in stand-up. I didn't see myself as a stand-up comedian, because I had an image in my head of what a comedian looked and sounded like and it didn't feel like me. But I let go of that and decided, it's you and a microphone and you do whatever you please.

Do you ever feel any pressure to be a social commentator, or constantly update material to respond to events?
I don't respond to specific events, except sometimes on twitter? Stand-up takes time to craft and so if I'm going to be good, I need to work on ideas a longer time. It's long haul. There are things I been thinking about since high school I'm still trying to figure out how to talk about. I do think the anxieties of the time filter in, in terms of what feels most pressing to talk about. Like this show I'm doing this year has a lot to do with shame around female sexuality, and that feels especially pressing.

Equally, do you feel there has been a shift in public sentiment that has affected your work?
When I see people hating on feminists that tends to make me feel an urgency to be more disruptive and agitating, in kind of blatant, absurd ways. I've been posting a lot of imagery involving my own face as a menstrual stain recently...that is definitely me acting out in a silly way in response to the times. I'm getting kinda primal and feel like why not?

Describe the last year in 5 words or less?
Volatile.

What advice would you give to someone who wants to take a show up to the fringe?
I'm new to the game, but what I've learned so far is try to book your living quarters early. It books up fast. Is that boring? It seems key.

And what advice do you wish you’d been given when entering the industry?
Eyes on your own paper. Really. Count no man lucky until he's dead!

When and where can people see your show?
1-26 Aug. Pleasance Courtyard That. 5:45pm 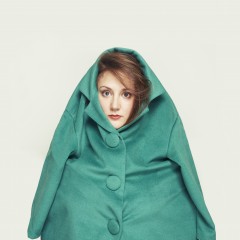 American comedian Jacqueline Novak talks to Voice about her upcoming Edinburgh Fringe show, 'How Embarrassing for Her'