Myq Kaplan (pronounced Mike) talks to Voice about why he got into comedy, what advice he'd give to those wanting to follow him, and provides a long list of inspirations

Could you first introduce yourself to the reader?
Of course, thank you! My name is Myq Kaplan. It’s pronounced “Mike Kaplan.” (I made the spelling up when I was a weird kid, inspired by Prince changing his name to a symbol. I was like “that guy’s weird! I’ll be weird, too!” and then he changed his back and I was like “well, now I’m weird and alone.” And now it’s now, and I’m a weird adult!) I’ve been a standup comedian for about 16 years. I’ve performed on Comedy Central, Last Comic Standing, America’s Got Talent, and lots of chat shows (which I usually call “talk shows,” but I’m here to connect with you). I’ve put out a bunch of comedy albums and had my own standup special called “Small, Dork, and Handsome,” on Netflix and now Amazon. I’m a polyamorous vegan who does ayahuasca, and if you want to know more, I’d love for you to come see my show. Thanks for reading, attending, and/or doing all that you do.

Tell us about your show?
The show, "All Killing Aside," is about love and death and philosophy and not murdering. It's about truth and kindness and hallucinogenic plant medicines that can reveal the underlying spirit that we all share. It's comedy! Super fun comedy about death. And life. And more. Comedy about the universe, by the universe (as personified by comedian Myq Kaplan [that's me]).

Why do you want to perform at Edinburgh Festival Fringe and is it different from other festivals?
One reason I’m really looking forward to performing at Edinburgh is that I never have before, and I’ve heard it’s an amazing experience. (A thing about me: I enjoy amazing experiences.) I’ve also heard that it’s the biggest festival of its kind in the world, so that’s exciting to imagine being a part of. And soon, my imagination will be a reality. Like magic! (Another thing about me: I enjoy magic becoming real!)

What first motivated you to enter the industry? Who were your inspirations?
Before I started doing standup, I was actually aiming to be a singer-songwriter. Some of my songs were funny, so I found a comedy club that let me perform them there. In between the songs, I would just talk, and sometimes people would laugh. Then I realized, if I can make people laugh with just talking, maybe I don’t need to carry this guitar everywhere. So what really motivated me to get into standup was how heavy my guitar was. And the joy I felt making those first audiences laugh.

Do you ever feel any pressure to be a social commentator, or constantly update material to respond to events?
One goal I have is to keep up with what’s going on in the world as a human being, and another is to always be creating new material as a comedian. Thankfully, these two concepts constantly complement one another. I don’t know if you know, but it seems like there are things happening all the time, so it’s valuable for me to be aware and learn as much as possible. I feel good being informed so I can hopefully be helpful, and I feel good having new wells to draw material from, so the good news is there isn’t really any pressure at all. The bad news is that sometimes the news is bad. But I’m doing what I can. Which is more than I used to do. (I used to do things that I couldn’t.)

Equally, do you feel there has been a shift in public sentiment that has affected your work?
Things are always shifting, I would say, in me and in the world. (Also I am in the world, so I think this checks out.) Society today is different than it was ten years ago, or twenty, or fifty, or feel free to insert any number (except for zero… society is the same as it was zero years ago). One big difference these days is that a lot more voices are being heard, which I think is generally speaking for the best.

So, one way that has impacted my life, is I’m doing a lot more listening. Which might be weird to say as a standup comic. I still talk when I go on stage, but maybe there’s more that goes in these days, compared to what comes out. It’s hard to tell if this is because of shifts in the outside world, or the inside of me, or both. Seems like both are working together sometimes. So, the world and I are both doing our best. I think and hope.

Describe the last year in 5 words or less?
My girlfriend’s nice. (And looking.)

What advice would you give to someone who wants to take a show up to the fringe?
Don’t! Come be in the audience of my show instead! Every night! Or if you really want to do your own show, that’s okay.

And what advice do you wish you’d been given when entering the industry?
I’m actually glad with the way things have gone, so I worry that if I went back in time to give myself different advice, then that could lead to a butterfly effect causing things to get much much worse. Like what if it led to the movie “The Butterfly Effect” never existing, because I started doing comedy in 2002 and it didn’t come out until 2004. Better to be safe and just go with the advice I WAS given starting out, which was basically “don’t go over your time.” So I hope I haven’t gone over my time here.

When and where can people see your show?
My show, “All Killing Aside” is happening at Underbelly, Bristo Square (Venue 302). It runs from August 1 through August 26 at 9:15pm each night, with one day off on August 13.

And where can people find, follow and like you online?
I am @myqkaplan on Twitter and Instagram. My Facebook page is facebook.com/myqkaplan. I have a website at myqkaplan.com, and feel free to put “Myq Kaplan” in anywhere else online and see what turns up. Maybe I’ve forgotten some. And thank you very much! 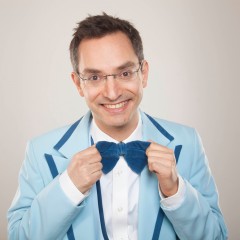 Myq Kaplan (pronounced Mike) talks to Voice about why he got into comedy, what advice he'd give to those wanting to follow him, and provides a long list of inspirations