Hans the Boy Wonder from Berlin takes some time to talk to Voice about his show, Ed Fringe, and offers advice to those who want to take a show up.

Could you first introduce yourself to the reader?
I am international superstar, sex symbol, home wrecker, accordionist, Madonna fan… Hans!

Why do you want to perform at Edinburgh Festival Fringe and is it different from other festivals?
Edinburgh has such a wonderful energy. Audiences are willing to take a chance on something new and really become very loyal when they see something they like. So I’m looking forward to coming back and seeing all the friends I met last year.

What first motivated you to enter the industry? Who were your inspirations?
Oh look, honey, I’m just here for the money.

Do you ever feel any pressure to be a social commentator, or constantly update material to respond to events?
I think in cabaret especially, you use whatever’s happening in the room, outside the room and all around. Material can come from current events or from people in the audience. I like it that was because it keeps everything fresh and almost becomes just as much a show for me as it is for the audience.

Describe the last year in 5 words or less?
Scary! So let’s have fun!

What advice would you give to someone who wants to take a show up to the fringe?
Be organised. Get a good producer and research Edinburgh before you go. AND DON’T PARTY TOO HARD!!!

And what advice do you wish you’d been given when entering the industry?
I was given this advice and I think it was the best thing I was ever told and it seems so simple but PERFORM AS MUCH AS POSSIBLE. Take the gigs, do the work. It’s the only thing that makes you better and makes people know who you are. It’s so much better for people to see you for themselves than to hear about you from someone else.

When and where can people see your show?
Hans: Like A German. Assembly Rooms, The Blue Room. August 2-19 at 9:50pm 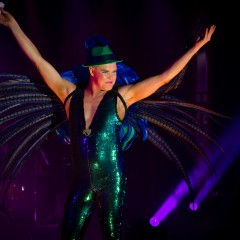 Interview with Hans the Boy Wonder from Berlin

Hans the Boy Wonder from Berlin takes some time to talk to Voice about his show, Ed Fringe, and offers advice to those who want to take a show up.