Nick Dixon takes some time to talk to Voice about his show, inspirations, and give advice to young people.

Could you first introduce yourself to the reader?
I am Nick Dixon, “The most exciting new comedian of 2018”. The Times called me "Hugely engaging”, and Chortle described me as “A future success”.

Last year Will Smith chose me to write jokes on his recent Hollywood movie after seeing my Comedy Central clip (which you can find on YouTube).

A lot of people are calling me the "Saviour of comedy", which might be a bit much. I suppose they just mean comedy has become so bland that it’s great to see someone new who is really original and genuinely funny.

Tell us about your show?
It's called 'Marriage Material' and it's about the problems I had after getting engaged, plus relationships in general, family, money, nearly dying, and trying to be a man (but women also love the show, and lots of couples seem to come). People who have seen early versions of it say they love how I talk about real things and how funny I am off the cuff as well as having great jokes.

Why do you want to perform at Edinburgh Festival Fringe, and is it different from other festivals?
It's the biggest arts festival in the world, and if you’re a UK comic you have to do it to prove yourself.

What first motivated you to enter the industry? Who were your inspirations?
There is no "industry". Comedy is a calling and my only inspiration was myself. I have been funny my whole life, it's a God given gift. At 10 years old I remember jumping in with a perfectly timed joke and making the entire class and the teacher laugh. From that moment I knew what I wanted to do.

But I also like Woody Allen and Garry Shandling.

Do you ever feel any pressure to be a social commentator, or constantly update material to respond to events?
No. Universal truth is much stronger than topical jokes. That's the "update" part of the question. As for social commentary, any comedian is doing that to some degree. But I mainly talk about things that affect us all - relationships, family, getting older, paying the rent.

It is tempting to get more political in a culture and "industry" where just telling the truth can end your career, but I am a comedian, not an activist. If I'm desperate to say something and it comes from love and truth rather than anger then I will say it.

Equally, do you feel there has been a shift in public sentiment that has affected your work?
Nothing has really affected my work as my jokes are always skillfully designed to have an edge but not go too far.

The only relevant shift might be the open discrimination against white men that stops some comedians getting jobs now.

What advice would you give to someone who wants to take a show up to the fringe?
The vast majority shouldn't go - deluded open mic comics, students wasting space, unfunny pseudo-comedians doing shows about horrific traumas. For the ones that should go I have no advice as they'll figure it out.

And what advice do you wish you’d been given when entering the industry?
Consistency is key. Also there is no "industry".

When and where can people see your show?
7:15pm at the Just The Tonic Mash House - Snifter Room. 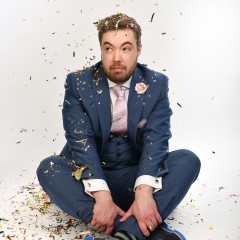 Nick Dixon takes some time to talk to Voice about his show, inspirations, and give advice to young people.