Sindhu Vee takes some time to talk to Voice about the show, inspirations, and give advice to young people.

Could you first introduce yourself to the reader?
Hi there. My name is Sindhu Vee and I’m a stand up comedian. I’m also the tallest Indian woman you are ever likely to meet. And there’s 16 letters in my actual last name but I’ve made it easy for you by boiling it down to 3. Some people refuse to be satisfied by this and turn their attention to my first name and then struggle with that.
So again, I’ll help: it rhymes with Hindu. Which I am. So its convenient.

Tell us about your show?
My show is called Sandhog (you’ll have to see it to know what exactly is going on with that word). Its about how difficult it is to maintain true, long-lasting love in your life - whether from marriage, kids, parents, friends (obviously different kinds of love in all these cases otherwise it would be very creepy) BUT how much we want to keep love in our lives which is why we put up with so much shit. And also techniques we can use to minimise the shitty moments.

Why do you want to perform at Edinburgh Festival Fringe, and is it different from other festivals?
I don’t have enough experience of other festivals to make this comparison. That said, the Edinburgh Fringe is, easily, the best known, largest comedy festival, and its a privilege to be able to perform there. Plus, its 5 hours away by train and all my comedy pals are going to be there for a whole month, so, really….I can’t think of a single reason why I wouldn’t want to do it.

What first motivated you to enter the industry? Who were your inspirations?
As a very young child I watched Carol Burnett on a loop on TV. I even snuck over to the TV after bed time to watch it and had to paste my ear to the screen because the volume had to be so low so I couldn’t see anything. I know she made me think of comedy as the best thing ever to see and do.

The Indian actor Amitabh Bachchan, who was not a comedy actor per se but had phenomenal comic instincts that he used a lot in his dramatic roles, profoundly influenced my instincts about comedy: that if delivered in the most serious, dramatic environments, it has the greatest impact. And that to have comic timing is everything.

Do you ever feel any pressure to be a social commentator, or constantly update material to respond to events?
No.

Equally, do you feel there has been a shift in public sentiment that has affected your work?
Not really. The entertainment field is evolving rapidly and these shifts are definitely creating an environment more welcoming to my work (along several dimensions) even though they don’t have a direct, obvious bearing on my stand-up.

What advice would you give to someone who wants to take a show up to the fringe?
Go when you feel you want to not when you think you ‘should’.
Save as much money as you can beforehand.
Preview your show alot and listen to notes from those you trust.
Have a close set of friends to lean on while you’re up there.
Enjoy it - no matter what you think of how the month went, you will come out a better comic. Its comedy bootcamp.

And what advice do you wish you’d been given when entering the industry?
All the advice that I was fortunate enough to get because comedians are very welcoming and there isn’t a lot of hierarchy.
The best piece which I keep in mind even today is “you learn more from the gigs you die at than from the ones you kill at”

When and where can people see your show?
Sandhog
The Pleasance (in The Attic)
4:30pm Aug 1-26 daily. 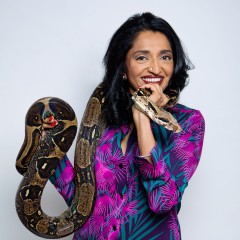 Sindhu Vee takes some time to talk to Voice about the show, inspirations, and give advice to young people.