Katie Reddin-Clancy takes some time to talk to Voice about her second solo theatre show, her inspirations, and to give advice to young people.

Could you first introduce yourself to the reader?
Sure, I’m Katie Reddin-Clancy, writer, performer and producer of GRACE. Oh and just an FYI, I’m also godmother to a foal…which lead me down the most amazing track of training as a horse whisperer… Questions?!

Tell us about your show?
GRACE is my second solo theatre show. It’s about Alfie, the male half of a comedy double act, who re-enters the stage as Zora, a woman. Zora battles stage fright so Alfie plays characters they met on the road until she’s ready. It’s a charming, funny rollercoaster through show business, spirituality, identity and love.

I was thrilled that my preview was nominated as Best New Play in Brighton Fringe 2018 with New Writing South, a real honour. Before that, I went to Adelaide Fringe Festival and Melbourne International Comedy Festival where I developed the show. There it was called, “an important statement about gender and performance” which meant the world to me. Ideally as a writer, we always want to write something memorable that just might throw a curve ball into how the audience think in the future, so I’m really excited to bring GRACE up to Edinburgh.

Why do you want to perform at Edinburgh Festival Fringe, and is it different from other festivals?
Edinburgh is the biggie. It’s the one that all the other festivals help you work towards. I know it’s going to be tough but incredible. I hope!

What first motivated you to enter the industry? Who were your inspirations?
My family are in the industry. My grandmother, Joan Reddin, was a theatrical agent and my cousins were West End stars when I was young so it was a bug I got early on.

My parents persuaded me to try other things instead, which I did and loved. I trained as a journalist, which then led me to presenting and producing a breakbeat radio show, ‘The Menu Sessions’ on Ministry of Sound & Breaks FM, with Atomic Hooligan & Jay Cunning. It was an enormous amount of fun. Such a great scene. Particularly in the days when clubs like The End, Fabric and The Cross were in their heyday. Both the music scene and all my friends who ran nights, labels and DJ’d were real inspirations. Also the radio show came second internationally as Best Radio Show for breakbeat in Breakspoll receiving 150,000 downloads that month so it was hugely rewarding. The Menu label and artists all won prestigious awards.

There came a point however, when a dear friend from Manchester University sat me down over a bottle of wine and said, “Now Katie, when are you going to actually train as an actress”. She then gave me the link to Atlantic in NY. As soon as I saw that Atlantic was founded by David Mamet and William H. Macy, it wasn’t long before I secretly applied, got in and ran away to join the circus.

The growth and reliance of our society on social media means that we are all social commentators, be that posting about politics, events or liking a friend’s photo. We are all responsible for giving people that validational “like” or are recognisable in our absence.
I only feel drawn to respond to events that are relevant to my passions or my work though. I’m not one to make outlandish personal statements or reveal how I feel on social media. I prefer to keep that part of myself private. I think partly that’s because I’m wary of how aggressive people can be towards you and there’s no going back. If it’s something that’s hugely personal to you and you get attacked or trolled, it’s pretty rough.

However, I fully support people who want to share what’s personal and important which I’ll absolutely share and promote if I agree with it. Just as long as people pipe down on their glorious holiday snaps if God forbid there is rain in Edinburgh! No one needs to see that…

Equally, do you feel there has been a shift in public sentiment that has affected your work?
There has been a huge shift with women’s rights, not just as it’s 100 years since we got the vote but with the #metoo campaign. #metoo is a total game changer. It’s finally moved the goal posts over what’s acceptable, and regrettably, sometimes expected for young female artists to surrender in order to climb the ladder. “Marilyn Monroe said, you earnt careers” is a line from my show. It’s opened up a great debate and a protection system for women in the industry like Vicky Featherstone’s, ‘No Grey Area’ in response to the Weinstein scandal at the Royal Court. I think most female writers are making some reference to this movement as it’s very much of our time. As theatre is a social X-ray, how could you not.

The other big shift is the gender revolution that is happening. Led perhaps more into the mainstream consciousness with the gay marriage debate. I think it’s a great thing that the spectrum of gender is more widely known, accepted and industries like retail, advertising and entertainment are responding to a new more reflective audience. We’re reversing back to pre-Roman times where intersex people were revered as gods and the two-spirit people were worshipped in indigenous North American culture.

We’re all on the gender spectrum somewhere. Increasingly, the traditional notions of gender are being challenged by progressive attitudes that gender is fluid. This is a profound change to society that progressive brands, companies and artists are responding to, not just to keep up with young people, but to reflect the times. GRACE is definitely playing in this arena and I’m finding it fascinating. I’m very grateful to all those people who have opened up and shared their stories to help me tell my characters’ stories.

What advice would you give to someone who wants to take a show up to the fringe? Be as prepared as you can be for your opening night. Don’t cancel your previews. Look after yourself – physically and mentally. Have a director not just for rehearsals, but to watch your previews and first few performances. Try not to allow press in on the first night! It’ll always be smoother on the second and you and press will enjoy it much more!

And what advice do you wish you’d been given when entering the industry?
Rejection isn’t personal. Resilience and hard work will pay off. Agents don’t have someone like you! Create your own work. 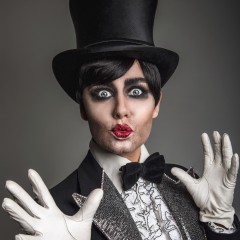 Katie Reddin-Clancy takes some time to talk to Voice about her second solo theatre show, her inspirations, and to give advice to young people.