Douglas Walker takes some time to talk to Voice about his show, inspirations, and to give advice to young people.

Could you first introduce yourself to the reader?
Hello, my name is Douglas. My friends call me Dougie. You can call me Douglas

Tell us about your show?
My show is a one-man theatrical narrative comedy documentary about the secret and sinister origins of Santa Claus. It is probably the best one-man theatrical narrative comedy documentary at the Fringe, certainly the best one that is Christmas related. Jarred Christmas’s show is probably pretty good, but that’s a slightly different genre.

Why do you want to perform at Edinburgh Festival Fringe, and is it different from other festivals?
Edinburgh is unlike any other festival you can do. At most festivals you only do a few shows, a week maximum. But in Edinburgh you do 25 nights or more, back to back, and nothing hones a show like that intense burst of activity, performing in front of a different audience every night. And if your act is a little alternative it can find its audience in Edinburgh, the weird and wonderful really get their chance to shine.

What first motivated you to enter the industry? Who were your inspirations?
When I was 8 years old I played my first comedy role: John in a pantomime of Peter Pan. I’ve basically never looked back. I instantly liked making people laugh. As I got older I realised it was fun to make them think too. I’d say my inspirations were people like Daniel Kitson, Andy Kaufmann and The Bonzo Dog Doodah Band. People whose comedy sits right on the edge of theatre.

Do you ever feel any pressure to be a social commentator, or constantly update material to respond to events?
I do the odd bit of social commentary, but it is rarely so topical that I need to constantly update it. I write a new show every year, and the themes I’m tackling tend to have a long enough shelf life to see the year out. I also have a fairly bloodyminded approach to timing my material, as my Christmas show in August can attest.

Describe the last year in 5 words or less?
Inexorable progress around the sun

What advice would you give to someone who wants to take a show up to the fringe?
Don’t do the show you think you ought to do, do the one you want to do.

And what advice do you wish you’d been given when entering the industry?
Perform as often as you can. The material doesn’t have to be perfect before it goes in front of an audience, it’ll always change once it’s on stage anyway

When and where can people see your show?
Douglas Walker presents: Of Christmas Past is on at 22:50, Aug 1st-26th (Not 14th) at Underbelly Bristo Square. 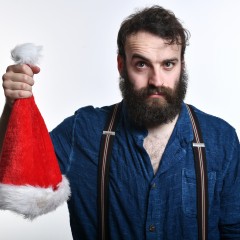 Douglas Walker takes some time to talk to Voice about his show, inspirations, and to give advice to young people.