Micky Overman takes some time to talk to Voice about her show, inspirations, and give advice to young people.

Could you first introduce yourself to the reader?
My name is Micky Overman. I’m Dutch, I wear glasses, I’m an aries. I mean, I don’t know if that gives anyone an idea, but it should. It really sums me up, actually.

Tell us about your show?
It’s called Role Model, and it’s stories of my relationships and my job as a nanny (like Mary Poppins! In case you don’t know what a nanny is.) There’s also a bit of filth, if that’s what you fancy.

Why do you want to perform at Edinburgh Festival Fringe, and is it different from other festivals?
You get to do your own show to people who actually want to see shows and want to see comedy! It seems that should be a given, but it tends not to be. I’ve done a bunch of smaller festivals around the country, which are all really nice, but Edinburgh is the big one. Plus, when you’re up there you get to see lots of shows yourself, which is amazing.

What first motivated you to enter the industry? Who were your inspirations?
I had seen some American stand-ups before, like Sarah Silverman, and a ‘turned-out-he’s-gross person’, but actually knew very little about it. I had an inkling I wanted to try it, so I moved to London. If I had been absolute dogshit that would have been a dumb thing to do, but so far it’s going okay.

Do you ever feel any pressure to be a social commentator, or constantly update material to respond to events?
No. I do think, however, that my opinions and social commentary shine through some of the material, but it’s not intentionally there.

Equally, do you feel there has been a shift in public sentiment that has affected your work?
It’s hard to say. Women’s issues have been on the forefront a lot, which is good, but I don’t think there’s any more tolerance for women on stage. But then, I’m not doing stand-up in an age where there was absolutely zero tolerance for women on stage, so in that sense it’s already lots better. We’ll just have to see.

What advice would you give to someone who wants to take a show up to the fringe?
Get an extra job.

And what advice do you wish you’d been given when entering the industry?
Don’t listen to anyone’s advice. What works for one person, doesn’t necessarily work for you. (I know that means don’t listen to this bit either, but do, this is good advice.)

When and where can people see your show?
My show is on at 10.30PM at Bunker 2 at the Pleasance.

And where can people find, follow and like you online?
@mickyoverman for about everything. I mean, I’m the only one with this name, so it’s easy. 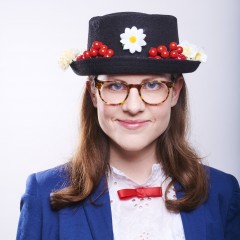 Micky Overman takes some time to talk to Voice about her show, inspirations, and give advice to young people.