Could you first introduce yourself to the reader?
Dick and Dom from Dick and Dom

Tell us about your show?
It takes the form of a boxing match, we split the crowd in half (The Dick’s V The Dom’s) and play loads on insane games with the whole audience. An onstage ref gives out the points.... oh and there’s mess!

Why do you want to perform at Edinburgh Festival Fringe, and is it different from other festivals?
Over the past 5 years we have been doing more live work than ever before, so Edinburgh Festival really is the top spot for live performers.

What first motivated you to enter the industry? Who were your inspirations?
We were both inspired by The Goons, The Goodies, The Two Ronnies and The Pythons....which hopefully reflects in our work.

Do you ever feel any pressure to be a social commentator, or constantly update material to respond to events?
NOPE!

Equally, do you feel there has been a shift in public sentiment that has affected your work?
NOPE!

Describe the last year in 5 words or less?
SOMETHING WEIRD HAPPENED!

What advice would you give to someone who wants to take a show up to the fringe?
Make sure you book accommodation in advance (which reminds me)…

And what advice do you wish you’d been given when entering the industry?
Don’t fall in love with BBC Television Centre too much......It’ll get bulldozed! Oh and always have a vocation to fall back onto.

When and where can people see your show?
It’s at the glorious Underbelly McEwen Hall 1st-12th August @1pm. 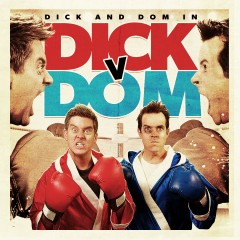 Interview with Dick and Dom