Julia Sutherland takes some time to talk to Voice about her show, inspirations, and give offers advice for those heading up to the Fringe

Could you first introduce yourself to the reader?
Hi! I’m Julia Sutherland and I’m a comedian and broadcaster, from sunny Glasgow!

Tell us about your show?
Well, over the last couple of years, I have interviewed dozens of top comedians for my BBC Radio 4 and Radio Scotland series - ‘Funny And It’s True’, ‘Funny Kind of...’ and ‘The Funny Life of...’.  Each comedian was on the show because they challenge taboos with their comedy, and transformed what were often their darkest personal experiences into laughter. The response we got from the radio audience was overwhelming – lots of people had been through similar things, and were so happy to hear someone they could relate to, not only talking about - but making jokes about it! Through comedy, they could tackle really difficult subjects, in an empowering way.

I was inspired by these other comedians honesty and openness, and so I decided to try and do something similar to the radio shows for my live Fringe show, so as well as classic stand-up, I also have sections of the show where I literally interview myself!  You’ll have to come to the show to see how we pull it off!
But basically it’s a relateable, fun and hopefully uplifting, confessional stand-up show!
(...and you don’t also have to be a 40-something mum-of-one going through a divorce and a mid-life crisis to enjoy it too!)

Why do you want to perform at Edinburgh Festival Fringe, and is it different from other festivals?
There is NOTHING else like it!! Apart from the sheer scale of it, it’s just such an amazing buzz, with so many great comedians on every day.  Being able to go and see all my favourites perform live, and to hang out with my comedy friends from all over the world is just awesome.

Performing at the Fringe is also incredibly special – I get to do the thing I love most, EVERY DAY... for a MONTH!!! There’s nowhere else you can do that. And I’ll be a show I’m really proud of, for an audience that have specifially come to see me.  That’s a real privilege.

What first motivated you to enter the industry? Who were your inspirations?
Well, the way I got into stand-up was a little unconventional! I was Fred MacAulay’s on-air side-kick on his morning radio programme, and I ended up being entered into a stand-up competition by one of the producers, as a stunt for the show!  I had to write 5 minutes of material and perform at the Scottish heat, and it was all recorded and played out on the radio! So... you know - no pressure! I ended up winning the heat and falling in love with stand-up.

To be honest, I hadn’t really seen much live stand-up before I started doing it!

The first comedian I saw live was Dylan Moran at the Fringe in 1996, the year he won the Perrier award. He was awesome and I totally ‘got’ what made stand-up special at that show. Finally gigging with him at the Stand a couple of years ago felt surreal!  Fred MacAulay has been a bit of a mentor for me, and he inspires me every time I see him live, as he’s an absloute master.  I’ve obvioulsy become more obsessed with stand-up now, and watch as much as I can to try and learn – as well as for fun, of course!  I love American comics Maria Bamford and Sarah Silverman who both have absolutely my sense of humour, and watching them pushes me to be the best I can be. Closer to home I am inspried by Terry Alderton, who does comedy like no-one else! He’s a genius.

Do you ever feel any pressure to be a social commentator, or constantly update material to respond to events?
Yes, I do feel like I need to at least have a few jokes about current events – but I run a weekly new material gig in Glasgow, which I also compere, so that helps me to keep on top of what’s going on.  I dont feel pressure to be a social commentator – but I think it’s sort of an unavoidable part of doing stand-up... even when your comedy is quite personal, as mine is, you end up talking about the things that influence all our lives in some way.

Equally, do you feel there has been a shift in public sentiment that has affected your work?
I think that people have become more open to talking about mental health, which makes joking about it easier too!

Describe the last year in 5 words or less?
Emotionally exhausting but frequently hilarious!

What advice would you give to someone who wants to take a show up to the fringe?
Wait until you’re ready – it’s not just hard to write a full hour of good comedy, there’s the performance level you have to be at, which can take years to get to... it’s like running a marathon – you have to do the training or you might die! I’d also reccommend coming to the Fringe and going to see lots of shows first too.

And what advice do you wish you’d been given when entering the industry?
To not compare yourself to anyone else. You’re on your own journey, and have your own unique set of challenges.  Just focus on yourself and don’t worry about what everyone else is doing!

When and where can people see your show?
Gilded Balloon Teviot – up at the top of the building in the Turret! I’m on at 1.30pm every day except the 13th! 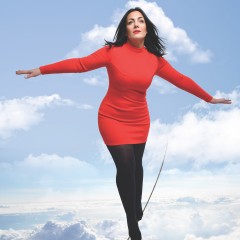 Julia Sutherland takes some time to talk to Voice about her show, inspirations, and give offers advice for those heading up to the Fringe