Catherine Bohart talks to Voice about her debut show Immaculate, and gives advice on the industry

Hi, I’m Catherine Bohart and I’m taking my debut show Immaculate to the Fringe this year. I’m the bisexual daughter of a Catholic deacon and I have OCD so as you can imagine it was tough to find material for my show…

In many ways my show is an ode to my father. Cliched, I know. We are from very different backgrounds and but our relationship has withstood my coming out, his becoming a deacon and me being very ill with OCD. The show is about the difficulty of us getting through all that, with some of the general absurdities of modern Ireland thrown in for good measure.

The scale of the Edinburgh Fringe is just immense - I remember coming to the Fringe for the first time as a new comic and just being astounded that you could just turn up and watch comedy in seemingly every pub, alley, shop changing room or public toilet in the city. Plus, Scottish audiences get my Celtic sensibilities more.

Honestly? A lack of work as an actor mainly! I never meant to be a comic but I’m so glad I am! I’m inspired by Sarah Millican, Katherine Ryan, Dylan Moran and Joan Rivers amongst many.

Mainly I feel pressure not to be a social commentator. It’s tough in a room full of attentive people to remind yourself that they’re here to hear you tell jokes, not rant about the state of the modern world. But then, maybe the best way to give a social commentary is through laughter? Learning while we’re laughing, guys.

Since I started gigging as a comedian, Ireland has legalised gay marriage, elected a gay Prime Minister and legalised abortion. I talk a lot about where I’m from in my comedy and audience’s perceptions of Ireland have shifted significantly while I’ve been doing this job. Ultimately, I’m thrilled for Ireland but man, the rewrites are killing me.

You should seriously learn to drive. 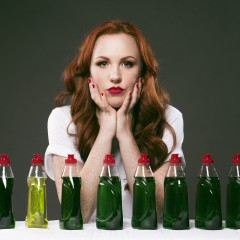 Catherine Bohart talks to Voice about her debut show Immaculate, and gives advice on the industry