Bryony Twydle takes some time to talk to Voice about her show, inspirations, and give advice to young people.

Hi, I’m Bryony Twydle. I’m a character comedian, which I guess means I’m terrible at being myself, so introducing myself to you is quite difficult. What I can tell you is that I like Riverdance, Barbra Streisand and I’m a terrible driver.

Flamingo is my debut Edinburgh show. My show focuses on 6 different characters and their loosely connected lives, ranging from a Greek sex therapist with a very questionable accent to a crazed unorthodox speed awareness instructor, who may or may not be based on a person I met as a result of my own terrible driving.

Well it’s the only festival that - because of the constant brewing of beer in the city - smells of Weetabix. But also I’ve performed at lots of different festivals and Edinburgh is in a completely different league. Sure it rains most days and is crippling me financially, but what other festival justifies you taking a month off work in order to prance around on stage?

I’ve always loved French and Saunders and did lots of sketch comedy while at university. Having performed at a few Edinburgh’s as part of a group, I decided that the time was right to create my own show. I continue to be inspired by so many funny women that I perform alongside on the circuit.

While my material doesn’t comment on current affairs on the surface, it is nevertheless informed by what’s going on around us, and many of the characters are underpinned by what we as women face every single day.

I started creating this show two years ago, before the Me Too and Time’s Up movements rose up, and one of the characters that I play is a Hollywood starlet, that spent her entire career being viewed through a male gaze – by setting the character’s career in the 1940’s and 50’s allowed us to heighten the misogyny that she faced. But as the scale of abuse in Hollywood became apparent we needed to re-write the character, so that it didn’t appear that we were mocking what has happened. I hope now we’ve struck the right tone with her and that she’s still funny…

Who runs the world? Girls.

Don’t drink too much at the beginning, you’ll lose your voice. Pack tuppaware, you won’t be able to afford to eat out every day. Whatever the reviews, whatever the audience numbers, enjoy your show – keep having fun, keep finding new things, keep playing. 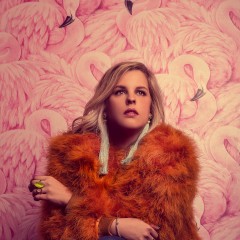 Bryony Twydle takes some time to talk to Voice about her show, inspirations, and give advice to young people.