Adam Rowe takes some time to talk to Voice about the show, inspirations, and offers advice on the industry

I’m a 26-year-old comic from Liverpool and I’m back at the fringe with my third show.

It’s an hour of stand-up comedy that I’m really proud of. I think it’s definitely the best show I’ve written by quite some distance (then again if you seen my first show, that probably won’t seem like a massive achievement). It’s about how I conduct myself and why that might be. I talk about my working-class background, growing up with an alcoholic single mother and the last year of my life. I’m basically trying to work out who I am, through a stand-up show. God that sounds so much more pretentious than I wanted it to, but sod it, it’s done now.

This is the equivalent of being asked “Why do you want to work here?” for a job interview in a petrol station. It’s because I have to! I have to perform here so that my ambitions have any chance at all of being met one day. It’s either this or move to London and the latter of those two options can go f**k itself. Yes, it is different from other festivals. Other festivals you usually do one or two dates at and get paid to be there, so Edinburgh is very different.

I really wanted to fill in Q&As at 3am the day before a deadline, because I forgot to do them two weeks ago when they first got sent. Also, I just wanted to have a laugh with my mates at first and then I got bitten by the bug - my inspirations were Jason Manford and Kevin Bridges and I think that was quite apparent early on in my work, but not anymore. I’m a huge fan of American comedy and I feel myself being more & more influenced by that all the time.

Not really, no. Certainly not on stage anyway. Every time something work talking about kicks off, it seems like it’s nailed on Twitter within about an hour anyway, so my stuff isn’t particularly topical, it’s more stories from my own life and my insecurities that are masked by an almost aggressive confidence. Also, whenever I see a celebrity get in trouble for saying or doing something, I just refuse to get involved in the immediate, virtual, public hanging for two reasons. Firstly, I’m a believer in due process and secondly; I know what gets said and shared in my WhatsApp groups and if they ever got released, every member of them would be arrested, so I can’t be a hypocrite.

No and I think any comic that says yes, is a bit of a cop out. Comics shouldn’t be told what to think, we’re supposed to tell you lot what WE think (or are pretending to think to fit our persona or whatever). It’s our job to convince you of our logic, whilst being funny. I think the best comedy comes from saying something that the audience immediately disagrees with or is upset by and then, not necessarily change their mind, but at least make them see your reasoning. My favourite bit in my own show this year is about how I love my girlfriend but she’s not “the one” - people hate that when I first say it, because it seems nasty. But it’s not. And if you come see the show, you’ll see what I mean.

Work your absolute arse off. There’s going to be a thousand reasons why things don’t go the way you want them to at this festival, don’t let your work rate be one of them - it’s one of the few things you can control.

Don’t get distracted by how other people are getting on. It’s got absolutely nothing to do with you, what other people are doing. This is the most individual art form and focussing on other people is not only pointless, but it’s actually detrimental to productivity. Also, you definitely don’t want to peak too soon - wait until you’re definitely ready to take opportunities, before seeking them. 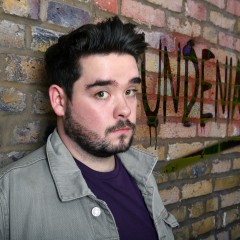 Adam Rowe takes some time to talk to Voice about the show, inspirations, and offers advice on the industry