WINDOW is Brighton Fringe's Arts Industry showcase created to develop and encourage artists ready for the next step in their career. We spoke to James Lorien MacDonald about their show Gender Euphoria, which was selected as a WINDOW winner.

Gender Euphoria is kind of a comedy snapshot of transitioning; it’s a solo show about the process I went through. But it’s also a place where I get to joke about the really messy areas of identity and labels—you know, the short and official answers about trans experiences are woefully incomplete. We have to present ourselves as fully-formed beings who are sure of everything, because otherwise people don’t believe us. But we need room to fuck up, too. My comedic style is kind of precariously conversational; I have my setlist but I’m never really sure what I’m going to say on the stage.

I’ve never even performed in the UK, possibly out of sheer terror, and I rather like the idea of getting swept up in a whirlwind of performances and bad life choices at 2am at the bar.

I’ve been performing for 20 years and doing stand-up for seven. Finland has been this little incubator for me where I’ve been able to tour and work and grow as an artist, but I’m ready to complicate that nice little life by touring and playing everywhere and anywhere. The show is ready and it’s the kind of voice we don’t yet have in mainstream comedy.

How did you react to being told you’d been selected to be showcased?

This actually remains to be seen once I arrive in Brighton—my Finnish colleagues have taken the news with what can only be described as gloomy solidarity, which is pretty much par for the course here.

The stage is my home and it always will be. But apart from that, I get younger people messaging me all the time saying that my show helped them come out, or that my show was the first time they heard someone really talking to them from the stage. Every time I think “god, why can’t I shut up about gender; surely the world is sick of this” I get someone coming up to me after the show and telling me exactly why it matters. I can’t even imagine if I’d’ve seen someone like me when I was 15, or even 25. Everything would be different.

In Finland we have a special brand of heckler. She’s a middle-aged Finnish woman who is three sheets to the wind and instead of heckling the performer onstage, she just shouts at her friends in the front row about what a crap show this is. It’s like being passive-aggressive heckled in the third person. I hope the UK never imports it.

I sit quietly and write new jokes. I’ve never done a show with zero new material and while that’s not everyone’s style, it’s just a part of my process.

I feel personally attacked by this question! In all honesty, I might go for long walks and get no ideas, read articles online and decide that I can’t repeat what someone else has said, and write pages of material that immediately get tossed. By the time I’m completely sure I am a total fraud and waste of stage time, the piece kind of shows up. This sounds like a really unreliable process but it’s been absolutely consistent for seven years, so I trust it.

What has been the single best piece of advice you’ve been given in your career?

Don’t base your act on what you think people want to hear. Dig deep into what you want to hear, and be courageous and generous with it.

I don’t know exactly how it’s changed in the UK as I only listen to Radio 4, but in general I’ve noticed a huge demand for comedy as autobiography, or as a way of teaching other people about difference. It’s okay to be the misanthropic cis white hetero able-bodied guy, but that perspective is losing its stronghold as a kind of default. Also this thing where a few comedians are complete rockstars with massive Netflix contracts is really bizarre to me. It’s boosting a lot of voices but also inflating the value of comedic work to proportions that make no sense.

Bootblack in a leather bar.

To be honest, I wouldn’t want to interfere with the timeline.

What advice would you give to young people who want to enter the industry? What should they do and not do?

Do: make friends, DIY, either find a scene that supports you or create it yourself, be patient, and get over any shyness about marketing yourself. Do the show you want to see in the world; I guarantee you’re not the only one who likes what you like.

Do not: shit-talk others, act unprofessionally, or underestimate your own value.

I’m best found on twitter and insta at @happeningfish, and https://www.facebook.com/jamiemacdonaldthecomedian/ 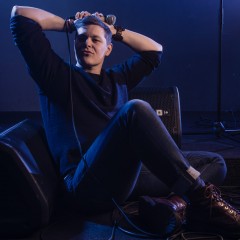 WINDOW is Brighton Fringe's Arts Industry showcase created to develop and encourage artists ready for the next step in their career. We spoke to James Lorien MacDonald about their show Gender Euphoria, which was selected as a WINDOW winner.